The USS Edson (DD-946) was a destroyer of the Forrest Sherman-class destroyer of the United States Navy . The ship served in the US Navy from 1958 to 1988 and was the first ship to be named after Marine General and Medal-of-Honor holder Merritt A. Edson .

The Edson's keel was laid on December 3, 1956 at Bath Iron Works in Bath , the launch took place on January 4, 1958, after the baptism by the widow of the namesake. After further equipment work, the destroyer was put into service on November 7, 1958 under the command of Commander Thomas J. Moriarty. After some training and test drives in the Caribbean and off Peru, the destroyer crossed the Panama Canal in early 1959 . On May 4, 1959, the Edson was assigned to the Destroyer Squadron 23 of the US Pacific Fleet in the new home port of Long Beach .

On January 5, 1960, after further exercises off the Californian coast, the destroyer's first mission in the Far East began. As part of the USS Ranger combat group , it took part in a large-scale rescue exercise off Japan. After the end of the first mission in May 1960, the first stay in the shipyard followed in July, during which minor defects that had occurred during the first voyages were remedied. After visiting the port of Portland , Oregon in June 1961, the Edson began its next mission in the western Pacific in August . In May 1964 and October 1965 the ship was also part of the 7th US fleet in the Far East. During the fifth mission, the Edson was shot at by North Vietnamese coastal artillery while on patrol off the Vietnamese coast and the superstructure was damaged. The damage was repaired in the United States Naval Base Subic Bay . In 1968, 1970 and 1971 further deployments followed off the coast of Vietnam. After the end of the Vietnam War , the destroyer continued to operate in the Pacific. During an exercise in December 1974, there was a serious fire in the engine room, but it did not cause any major damage to people or material. 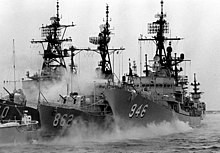 In the early 1980s, the Edson was assigned to the US Marine Reserve, but remained in active service until December 15, 1988.

After retirement, the destroyer was in the Intrepid Sea-Air-Space Museum in New York City as a museum ship next to the USS Intrepid on the quay from 1989 to 2004 . In 1990, the ship was designated a US National Historic Landmark and was also entered on the National Register of Historic Places . After a time in the Inactive Ship Facility in the former Philadelphia Naval Shipyard , the ship has been part of the Saginaw Valley Navy and Ship Museum in Bay City since 2013 .

Destroyers of the Forrest Sherman class