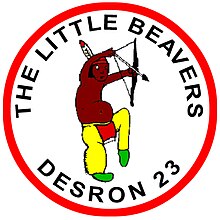 Little Beaver , the mascot of DesRon 23

The Destroyer Squadron 23 , or DesRon 23 for short , is a destroyer squadron of the United States Navy . DesRon 23 became known as The Little Beavers during the Pacific War . It was erected on May 11, 1943 and deactivated in February 1946. In April 1956 the Destroyer Division 231 was set up again and renamed DesRon 23 Little Beavers in December 1956 . It is based in San Diego , California and currently belongs to Carrier Strike Group 11 , which u. a. consists of the aircraft carrier USS Nimitz (CVN-68) , the guided missile cruiser USS Princeton (CG-59) and the Carrier Air Wing 11 .

The Destroyer Squadron 23 was set up on May 11, 1943 at the Boston Navy Yard . The first in command was Captain MJ Gilliam. When deployed, the destroyers USS Converse , USS Foote , USS Spence , USS Thatcher , USS Aulick , USS Charles Ausburne , USS Claxton and USS Dyson belonged to DesRon 23 .

On June 29, 1943, DesRon 23 , with the exception of the USS Aulick , became part of the 3rd US Fleet under the command of Admiral William F. Halsey and was mainly used for patrol services in the Southwest Pacific, as escorts and to combat targets near the coast during landings used.

Captain Arleigh Burke aboard the USS Charles Ausburne . The Little Beavers mascot is painted on the wing of the bridge .

On October 23, 1943, Captain Arleigh Burke became the commander of the DesRon 23 . In the following four months it was involved in 22 skirmishes in which a Japanese cruiser, nine destroyers, a submarine, several smaller units and about 30 aircraft were destroyed. Burke's constant order to his destroyers was: "Destroyers to attack on enemy contact WITHOUT ORDERS from the task force commander." . This time established the good reputation of the DesRon 23 and was the basis for being awarded a Presidential Unit Citation . DesRon 23 took part, among other things, in the naval battle at Empress Augusta Bay and the Battle of Cape St. George . The latter took place on November 25, 1943. A Japanese destroyer association, consisting of the transport destroyers Amagiri , Yugiri and Uzuki as well as the destroyers Onami and Makinami , was intercepted by the American destroyers and in a battle guided by radar it was possible to sink Onami , Makinami and Yugiri . The battle, which was rated as almost perfect surface action , ended the Japanese troop transports known as Tokyo Express by destroyer. After the liberation of the Philippines and operations off Okinawa , DesRon 23 returned to the United States and was awarded the Presidential Unit Citation on October 19, 1945 by Admiral Burke and Secretary of the Navy James Forrestal .

For extraordinary heroism in action against enemy Japanese forces during the Solomon Islands Campaign, from 1 November 1943 to February 23, 1944 ... Destroyer Squadron Twenty-three operated in daring defiance of repeated attacks by hostile air groups, closing the enemy's strongly fortified shores to carry out sustained bombardments against Japanese coastal defenses and render effective cover and fire support for the major invasion operations in this area ... The brilliant and heroic record achieved by Destroyer Squadron Twenty-three is a distinctive tribute to the valiant fighting spirit of the individual units in this indomitable combat group of each skilled and courageous ship's company ...

On December 18, 1944, the destroyers of DesRon 23 fell into Typhoon Cobra (Halsey's Typhoon) as part of Task Force 38 . The USS Spence capsized after several attempts to take fuel from other ships had failed and the destroyer was therefore very high in the water, around 11 a.m. in the typhoon . 317 men went down with the ship. 24 men were rescued from ships that were nearby.

In February 1946, DesRon 23 was temporarily disbanded and the ships mothballed in Charleston , South Carolina as part of the reserve fleet .

The DesRon 23 initially only included the Destroyer Division 231 with the destroyers USS Picking , USS Stephen Potter , USS Preston and USS Irwin . In May 1956, USS Irwin was replaced by USS Fechteler (DD-870) . From June 5, 1956 to November 1956, the DesDiv 231 belonged to the 7th US fleet and also carried out patrols in Formosa Street . On November 18, 1956, the DesDiv 231 returned to the home port of Long Beach. In 1957, the destroyer took a Good Will tour in the South Pacific and New Zealand. After that, patrols were again carried out in Formosa Street and sea maneuvers with the Navy of the Republic of China . On January 24, 1958 DesDiv 231 returned to the home port of Long Beach. In June 1958, the USS Stephen Potter was decommissioned without replacement. Trips to Japan, South Korea and Hong Kong followed. On March 27, 1959, he returned to the USA. As a replacement for the USS Stephen Potter , the USS Edson followed in May 1959 .

The Destroyer Division 232 , which emerged from the Destroyer Division 92 , ended its training trips on July 8, 1956 and began on August 16, 1956 with deployment trips in the Western Pacific. Including three months of patrols on Formosastraße . The Destroyer Division 232 consisted of USS Madox , USS Brush , USS Samuel N. Moore, and USS Herbert J. Thomas . The commanding officer was Captain HW Baker. DesDiv 232 returned to home port Long Beach on February 17, 1957. The next commander was Captain CB Carroll from March 1957. In 1957 the destroyers carried out a Good Will Tour to Australia, with the exception of the USS Samuel N. Moore, which was in the port of Pearl Harbor for repairs. There were also missions in the Mariana Islands and port visits in Japan. On March 1, 1958, DesDiv 231 returned to the Long Beach home port for shipyard overhaul and training. In April 1958 Captain SL Johnson took command of the DesDiv 232 On June 17, 1958 DesDiv 232 of Destroyer Squadron 23 assumed. In October 1958, there were again deployments in the western Pacific and ASWEX maneuvers with the Japanese sea self- defense forces . On April 22, 1959, he returned to Long Beach. In May 1959, Commander EM Glenn took command of DesDiv 232 .

DesRon 23's mascot is Little Beaver , a character from the Red Ryder cartoons by Fred Harmon. These cartoons were very popular with the destroyer crews during service during World War II. Due to the fast pace with which the destroyers' operations were carried out, the crews said they were busy as beavers . James Bowler, crew member of the USS Claxton , painted a picture on the side of a torpedo tube set of the destroyer showing Little Beaver shooting an arrow at Japanese Prime Minister Tōjō Hideki . Burke noticed the picture during an inspection on the USS Claxton . He liked it so much that he made it the logo for the entire DesRon 23 without a Tōjō .

Commanders of Destroyer Squadron 23 since formation:

Ships of the Destroyer Squadron 23