This article describes the Duchess Ursula zu Mecklenburg. For the so-called Duchess of Mecklenburg through marriage, see Ursula von Brandenburg (1488–1510) .

Ursula was the youngest daughter of Duke Heinrich V and his first wife Ursula von Brandenburg . Her mother died shortly after she was born, and she was destined for a life in the monastery from an early age. Her admission to the Poor Clare monastery in Ribnitz, where her aunt Dorothea zu Mecklenburg (1480–1537) was abbess at the time, was based on various sources when she was four or five years old. She was dressed on the feast of the birth of the Virgin Mary , September 8th, in 1522. Besides the auxiliary bishop Dietrich Huls , her father Heinrich V and her brother Magnus were also present .

On Trinity , May 22, 1524, she began her probationary year, with its expiration, also on the feast of the Trinity , she took her religious vows . The ceremony was chaired by the Provincial Minister of the Order of Saxonia , Franciscan Eberhard Runge . Four years later, on July 15, 1528, she was elected Vicaria and thus deputy to Abbess Dorothea.

Dorothea died in 1537 in a plague epidemic that affected the city and monastery alike. After a year-long vacancy, the sisters chose Ursula as their successor, who did not take over until 1538 after an initial refusal and remained with her convent of the Catholic faith. In 1568 she issued a monastery order confirmed by Emperor Maximilian II .

Ursula and the convent remained true to Roman Catholic teaching until their death. She also tried to protect the Catholic customs during worship in the Ribnitz town church, which was under her patronage , as long as possible. When Master Thomas Holzhüter was appointed Lutheran pastor in Ribnitz by the Duke of Mecklenburg, the town church was closed by order of Duchess Ursula. Holzhüter then preached in the Holy Spirit Chapel, which was under the patronage of the council. Because the resistance of the Catholics was still too strong, he left Ribnitz shortly afterwards. On January 19, 1556, the Güstrow superintendent Omecken gave the first Protestant sermon in the town church. After the Ribnitz church visit, the commissioners appointed Benedikt Schröder from Rostock as the first evangelical preacher and as assistant chaplain Joachim Johns in Ribnitz. Both strictly and zealously Lutheran, they often let themselves be carried away to abuse and threaten the Catholic abuses in the monastery. But all the complaints of the abbess Ursula and the monastery assembly against these attacks and denigrations no longer helped, so that at the end of 1556 they agreed to the Reformation .

When the three Mecklenburg monasteries, Dobbertin , Malchow and Ribnitz, were transferred to the Mecklenburg Knights and Landscapes to set up Lutheran women's monasteries in 1572, Duke Ulrich ensured that Ribnitz was exempt from the regulation as long as his cousin Ursula was alive. As a result, it was only four decades after the adoption of the Reformation in the Duchy of Mecklenburg that the Poor Clare Monastery could be converted into a Protestant monastery. 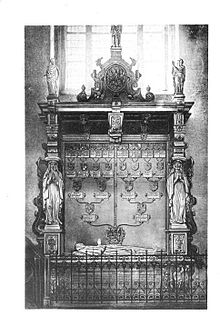 The epitaph of Duchess Ursula was also created in direct connection with the three ducal tombs in Güstrow Cathedral in the Wismar workshop of the Dutch sculptor and architect Philipp Brandin , whose most important collaborators were Claus Midow and Bernd Beringer. Brandin was a student and temporary employee of the Antwerp workshop of Cornelis Floris . The Güstrow cathedral epitaphs in particular correspond to his sense of style, but the Ursula epitaph differs more strongly from a religious pictorial program appropriate to the occasion. Under a canopy carried by two nuns' statues , which is crowned with statues of faith, love, hope in the attic zone and the Mecklenburg coat of arms, lies the full figure of the deceased in a nun's robe; the back wall shows her ancestral sample with 32 ancestors made by David Chytraeus . The epitaph was restored from 1859–1862 on the orders and expense of Grand Duke Friedrich Franz II . The plaque was so weathered in 1858 that the inscription was partially illegible. Friedrich Lisch supervised the work and added the inscription based on old records and sources. The Rostock sculptor Hermann Behr was contractually obliged to restore the building in accordance with the style, and Lisch prepared the report.

Another restoration took place from November 14, 1996 to June 1, 1999 by the sculptors and restorers Bernhard Lincke and Frank Döhler from Neu Nantrow.

The small epitaph painting in oil on canvas in the original wooden frame (H 81 cm, W 66 cm) was probably created in 1586 to commemorate the death of Abbess Ursula zu Mecklenburg. It was possibly painted by a portrait painter from the circle of Cornelius Krommeny working at Duke Ulrich's court in Güstrow. The picture is unsigned and perhaps just a contemporary, amateur copy for the Rühn Monastery, which Duke Ulrich's wife Elisabeth had converted into a women's pen. In its design, the picture is in the tradition of Lucas Cranach the Elder. Ä. Portrait of Cardinal Albrecht von Brandenburg (Alte Pinakothek Munich) painted around 1520/30, which shaped epitaph painting until the 17th century. The deceased abbess kneels praying in the habit of the Poor Clares with folded hands before the dead Christ on the cross and pleads: MISERE MEI FILI DAVID. (Have mercy on me, son of David). The cross defines the right half of the picture. Christ hangs on the cross with his legs drawn up, reminiscent of medieval depictions of painful crucifixes. A disc nimbus catches the head. Rays emanating from the invisible God the Father in the clouds meet Christ and Ursula as light signs. Ribnitz can be seen in the background. It is the oldest known representation of the city. Under the ducal coat of arms of Mecklenburg in the foreground is in a roller and fittings cartridge: VGG VRSVL AGHZMFZWGZSDLRVSF VND DOMINA. Z. RIBNITZ. DIED. .ANNO 15.86. (By God's grace Ursula, born Duchess of Mecklenburg, Princess of Wenden, Countess of Schwerin, the state of Rostock and Stargard's wife, Domina of Ribnitz). The painter tried to reproduce the light complexion with the red cheeks as faithfully as possible.

The memorial picture is an important testimony to the life of Abbess Ursula, of whom there is only a small stucco bust in the family tree of the Mecklenburg dynasty on the back wall of the Borwin epitaph in Güstrow Cathedral, apart from the portrait in Rühn Monastery and on the tomb.