Magnus was the eldest son of Duke Heinrich V , the peacemaker, Hereditary Prince of Mecklenburg. Since he died before his father, he did not come to the reign.

On June 11, 1516 Magnus received the four minor orders from Johann V , the Bishop of Havelberg , in the castle chapel in Lübz . Magnus, who was just seven years old, was elected bishop on July 21, 1516, followed by the oath of his father before the fully assembled cathedral chapter. The dean of the cathedral, Zutpheld Wardenberg, an experienced man well known to the curia, personally presented the document in Rome. The necessary dispensations were already given on November 5th, the actual confirmation of the postulate took place on November 13th, 1516. After that, Magnus was to take over the administration of the diocese himself at the age of 21 and was ordained bishop at the age of 27.

The education of the future bishop was supposed to be taken over by the Franciscans , whose monastery was near Schwerin Castle , but Pope Leo X's brief was not carried out. Since 1514 the humanist Konrad level and from 1524 the Wittenberg Arnold Burenius as the second teacher were the prince educators . In Wittenberg, Burenius had personal contacts with Luther and Melanchthon, whose new ideas Magnus also pursued. Because in 1538 he tried to abolish the celebration of Holy Mass at the Parchim parliament , which at that time did not yet succeed.

The provisional diocesan administration was now taken over by the two administrators, the apostolic protonotary and cathedral dean Zutpheld Wardenberg and the provost Reimar Hahn, who was replaced by the chapter senior Ulrich Malchow after his death. The previous Bremen suffragan Dietrich Huls was appointed as auxiliary bishop by Sebaste OFM.

The administrators of the diocese changed several times as a result of deaths, resignations and other causes during the immaturity of the postulate. Before 1532, the provost of Schwerin Cathedral , Heinrich Banzkow , took over the administration. With the introduction of the Reformation in Mecklenburg, Duke Magnus became the first Protestant administrator of the Schwerin diocese on September 16, 1532. Duke Heinrich had probably reluctantly relinquished the administration, because in 1535 he tried to have the Pope postpone the ordination of his son, which was actually due in 1536, until 1540.

Magnus had been married to Elisabeth of Denmark and Norway , the then nineteen-year-old daughter of the Danish King Frederick I , since August 26, 1543 . The wedding took place at Kiel Castle . The happy marriage remained childless "to the glee of the papists". Duke Magnus died on January 28, 1550 in Bützow and was buried on February 2 in the Doberan Minster . He himself had not held the title of bishop. His successor as administrator of the Schwerin diocese was his cousin Ulrich von Mecklenburg , who married Magnus' widow in 1556. 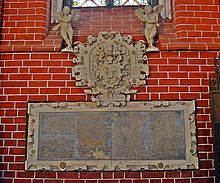 Epitaph for Magnus III. in the Doberaner Munster

In the Doberan Minster there is an epitaph for Magnus III, consisting of a sandstone coat of arms with five fields, set in a richly laid out and developed cartouche. In Schwerin Cathedral, too, there is an epitaph set for the postulate Magnus on a pillar of the high choir. His cousin Duke Johann Albrecht I had donated the epitaph to him. The inscription is located under a richly designed five-shielded coat of arms from Mecklenburg, which is flanked by two scholars with tomes in hand. Under the table an angel with a tome.

Magnus III had his own seal as administrator or postulate. Not. He used the unmodified Mecklenburg state coat of arms with five shields and in some cases for the cathedral pin of the chapter newer Saxony seal with the eagle on top.