from Wikipedia, the free encyclopedia
Template: Infobox Location in Turkey / Maintenance / District Without Inhabitants Or Area

Vakıflı ( Armenian Վաքիֆ Vak'if ) is a village in Samandağ district in the Turkish province of Hatay . Vakıflı is located about 27 km southwest of the provincial capital Antakya and 5 km north of Samandağ. Vakıflı had 123 inhabitants according to the last census in December 2009. Vakıflı is located about 9 km from the Mediterranean Sea. The population consists mainly of members of the Armenian Apostolic Church . Vakıflı is the last Armenian village in Turkey. The Armenians living here speak the western Armenian dialect.

The residents of Vakıflı are the descendants of those Armenians who escaped the genocide in 1915 and found refuge in nearby Musa Dağı . They fought off attacks by the Turkish troops for 53 days, until the French seafarers saw a flag with the words "Christians in Need: Save". The Armenian refugees were evacuated by the French to the Egyptian port city of Port Said . After the French occupation of Turkey in 1918 , the Armenian refugees returned to their seven villages in Hatay Province. After the peace treaty between Turkey and France on June 29, 1939, Hatay State was annexed to Turkey and six of the seven villages were depopulated. Half of the residents of Vakıflı left the village. Most of the villagers immigrated to Lebanon and mostly settled in Anjar . Modern Anjar was founded in 1939 by several thousand Armenian refugees from Musa Dağı with the support of the French colonial power. The six districts are named after the six villages (Haji Hababli, Kabusia, Vakif, Khodr Bek, Yoghun Oluk and Bitias) of Musa Dağı. In 2011, the 97-year-old Avedis Demirci was still living in Vakıflı. As a baby he witnessed the resistance from the "Mount of Moses". 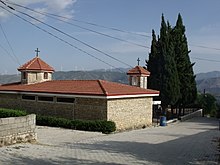 The Armenian Apostolic Church of Vakıflı

Between 1994 and 1997 the only church in Vakıflı (Church of the Holy Mother of God, Սուրբ Աստվածածին եկեղեցի , Surp Asdvadzadzin ) was restored and expanded with the support of the Turkish government. In 2005 the old school building and two other buildings were converted into a bed and breakfast .

Due to a lack of jobs, around 500 people left the village in the 2000s and have all lived in Istanbul since then . They maintain very good contacts with their home village, are organized in associations and mostly visit their families during the summer holidays. The Association for the Development of Vakıflı is based in Istanbul. The aim of the association is to implement ecotourism in Vakıflı.