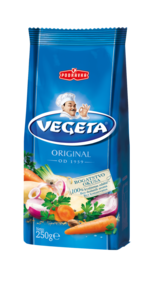 The Vegeta [ ʋɛgɛta ] is a salt-based mixture of the flavor enhancer monosodium glutamate with herbs and various vegetables and is used worldwide as a spice sold for food such as meat, soups and sauces.

The yellowish spice powder is produced by the Croatian company Podravka , whose headquarters are in Koprivnica . There is a branch in Poland and two licensing companies in Austria and Hungary. Comparable products from other manufacturers include Aromat from the German manufacturer Knorr or the Fondor product from Maggi . Aromat and Fondor are pure sprinkling spices without any dried vegetable powder. The similar Czech Vegetka and the Slovak Dobrota are now sold without glutamate.

Among the ingredients of Vegeta include:

Vegeta is offered in the variants "Original", "Spicy" and "Herbs". The two spicy and herb mixtures do not contain glutamate.

Vegeta was developed in the Podravka laboratories in 1958 under the direction of Zlata Bartl . It was launched in 1959 in Yugoslavia . In her honor, the company established a foundation for graduate and postgraduate students in 2001 .