This article is about the city of Koprivnica in Croatia. For other places with the same name, see Koprivnica (disambiguation) . 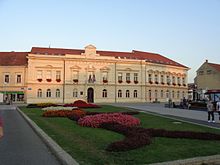 Koprivnica [ ˈkɔpriʋnitsa ] (German Kopreinitz , Hungarian Kapronca ) is a Croatian town with 30,854 inhabitants (2011), near the Croatian- Hungarian border on the river of the same name . Koprivnica is the capital of the historic Drau region Podravina and at the same time the headquarters of the Koprivnica-Križevci County (Koprivničko-križevačka županija) .

In the 13th century the name of the Koprivnica river was mentioned in writings (from the years 1207, 1209, 1217) of the Croatian-Hungarian king Andrija II Arpadović. The city was first mentioned in 1272 in the deed of donation from Prince Ladislaus IV . In 1356 Koprivnica was proclaimed an independent town, after which the town developed in the field of trade and also as a military base. The Stern, a type of castle, was known as one of the most modern anti- Ottoman fortresses of the Renaissance until the 1660s . After the peace in Žitva in 1606, conditions were created for a quieter economic development of Koprivnica. At the same time, the roads became safer and the cities became more attractive to merchants. The first merchants in the 17th century came from Germany and Venice . The city had well organized and regulated fairs where municipal and other craftsmen offered their wares. The fairs contributed to the strengthening of trade in Koprivnica. Later, Orthodox merchants of Greek origin and Jews were particularly important as merchants. In 1821 the Koprivnica merchants were members of a guild.

In the 18th century the general base was transferred from Koprivnica to Bjelovar on the instructions of the Habsburg Archduchess Maria Theresa , so Koprivnica was spun off from the Slavonian province. The city's great economic progress began in 1870 when the Budapest – Zakany – Koprivnica – Zagreb railway started operating. At the beginning of the 20th century the meat factory "Danica" and in the second half of the food company Podravka contributed a lot to economic progress. During the Second World War she was in the immediate vicinity of the Danica concentration camp operated by the right-wing extremist Ustaša .

The first soccer club in Koprivnica was founded by students in 1907 and was called the Koprivnica Student Soccer Club. The club was renamed Slaven on August 20, 1912 by the Friedrich family. In 1926 the association stopped its activity due to financial difficulties. Only in 1945 is Slaven mentioned again as a sports club. From 1953 to 1958 Slaven was called the sports club "Podravka", after which it was renamed back to the soccer club "Slaven". In 1992, the Bilokalnik company became the club's sponsor. Therefore the name is changed to the Slaven Bilokalnik football club. Two years later, Slaven got its new sponsor, which is still active today, and therefore bears the name Slaven Belupo . Since 1997 the team belongs to the 1st Croatian Football League .

The city is especially as the headquarters of the internationally primarily for edible spice Vegeta famous Croatian food company Podravka announced. In addition, the pharmaceutical company Belupo , a 100 percent Podravka subsidiary, and several other medium-sized companies are located in this business location. 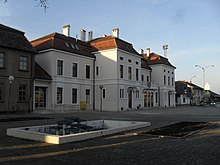 Koprivnica is the Croatian border station for traffic to Hungary and is on the Zagreb – Gyékényes – Nagykanizsa – Székesfehérvár – Budapest railway line .

Koprivnica has several kindergartens and elementary schools, a middle school, a high school and an adult education center. The Koprivnica Study Center of the Faculty of Economics at the University of Zagreb is also located here .

Towns and municipalities of the Koprivnica-Križevci County