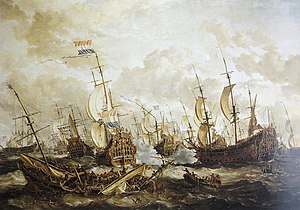 The naval battle of the four days was one of the numerous naval battles between the Dutch and the English in the course of the Second Dutch-English War from 1665 to 1667. It began on June 11, 1666 near the coast of Flanders , in the southern North Sea . In English they are called Four Days Battle , in Dutch Vierdaagse Zeeslag .

King Charles II of England had divided command of the English fleet between the admirals George Monck, 1st Duke of Albemarle , and Prince Rupert . The latter was posted with a third of the English fleet in the western English Channel, as an intervention of the French in the war was feared.

On the morning of June 11, 1666, the Dutch fleet under Admiral Michiel de Ruyter with 84 ships, 4,600 guns and 22,000 crew members anchored off Dunkirk . He hoped for France's help and wanted to unite his fleet with the French fleet. Monck learned of de Ruyter's presence and attacked immediately with his 58 ships.

In a southerly wind, Monck, coming from the west, met the anchoring Dutch. Around noon he attacked the southern rearguard of the Dutch fleet under Cornelis Tromp in a closed keel line formation . He was just able to cut the anchor ropes and set sails. The English hit him hard until about 4 p.m. As the fleets neared the coast of Flanders, the British fleet had to turn as their ships had more draft. This enabled de Ruyter and the Dutch vanguard under Cornelis Evertsen to intervene in the battle. In the turn, the English ship of the line HMS Swiftsure was captured along with two other ships and the Vice Admiral William Berkeley was killed. The Rainbow fled to Ostend , pursued by twelve Tromps' ships. During the night, both fleets repaired their damage. Incapacitated ships were released. Admiral Cornelis Evertsen fell when the burning HMS Henry repelled a Dutch attack with her last volley and escaped.

Monck repeated his attack on the morning of June 12th. The fleets met on an east-west course, and Tromp left the Dutch line, not, as is often claimed, to gain the windward position, but because he simply had not seen the right signals. He got into trouble again and de Ruyter had to come to his aid. The order of the Dutch fleet was completely dissolved. Since the British only had 47 ships left, they could not take advantage of this situation. In the afternoon the twelve ships that had pursued the Rainbow in vain reappeared on the horizon. Monck, believing it was a whole new squadron, stepped away in alarm and hoped for Prince Rupert to appear.

On the morning of June 13th, Monck retreated further north-west with 30 combat-ready ships towards the Thames estuary. The Dutch struggled to follow him and little fighting took place. However, one of the largest English ships, the 92-gun Prince Royal , flagship of Admiral George Ayscue , ran into a shoal. It was given to the Dutch and burned. That evening Rupert appeared and brought 20 fresh ships up.

The next day, both sides wanted to force the decision. Sailing eastwards, the Dutch managed to break into the line of the English. Both sides suffered heavy casualties in fierce close-range fighting, and the English finally broke off the fight. They had used almost all of their ammunition - the supply was 50 rounds per cannon. Vice Admiral Christopher Mings was fatally injured. The Dutch also left the battlefield because their lighter ships were badly damaged and they also had hardly any ammunition left.

This ended one of the longest sea battles in history with a Dutch victory. England lost ten ships and 5,000 men, including 1,800 prisoners, including two admirals (six ships were captured by the Dutch).

The Netherlands lost four ships and 2,000 men, including an important admiral (and also vice admiral Abraham van der Hulst ). How fierce the fighting was, the report shows that some of the ships involved had received more than 1,000 hits.

The war did not end with this battle. The English were able to make up for their losses quickly, while the Dutch believed for a short time that they had destroyed the English fleet. As early as August 4, 1666, the battle, known in English as St. James's Day Fight , followed and in which England remained victorious.