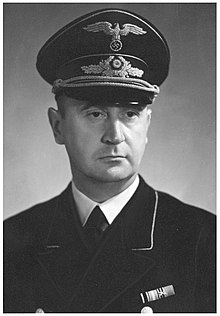 President of the Main Office for Economics in the German-occupied Generalgouvernement Walter Emmerich.

Emmerich finished his school career in Hamburg-Uhlenhorst in 1914 with the Abitur . It is not known whether he took part in the First World War afterwards .

From 1919 Emmerich worked as a commercial clerk and authorized signatory. From 1922 to 1930 he studied economics at the University of Hamburg . Emmerich received his doctorate in 1930. rer. pole. After that he was Heinrich Sieveking's assistant at the social and economic seminar in Hamburg until 1934 and was also a lecturer there. From 1934 he was department head in the Hamburg economic authorities. From 1935 he headed the liaison office of the monitoring office (export and import issues) in the administration for trade, shipping and trade . From 1937 he headed the free port management department and from 1938 represented Hamburg's interests in Vienna . He was promoted to Senate Director (Freihafenwirtschaft) in 1939 and to Senate Syndic in 1940.

He joined the SA in 1933 and the NSDAP in 1937. After the beginning of the Second World War , Emmerich was head of department from June 1940 to January 1945 and later president of the main economic office in the German-occupied Generalgouvernement (GG). He also headed the office for the four-year plan in the GG. In this context he was involved in the “ Aryanization ” of Jewish businesses and other anti-Jewish measures.

After the end of the war Emmerich was interned in the British internment camp Neuengamme for two years , but was not transferred to Poland. He later worked as a commercial clerk in Hamburg.