He was one of the most important advisors to both Joan I , Queen of Navarre and Countess of Champagne , and her son Louis , who later became King of France . In 1286 he was appointed Connétable of Champagne. 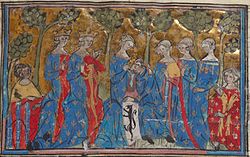 King Philip IV of France in the circle of his court. Outside left Walter von Châtillon, outside right his predecessor Raoul de Clermont. Illustration from the late 13th century.

In 1297 he led the French army against Henry III. , Count of Bar , the allies of the Count of Flanders . He took part in the campaign against Kortrijk and in the battle of the Spurs on July 8, 1302 and was then appointed Constable of France . In the French victory at Mons-en-Pévèle on August 18, 1304, he played a prominent role.

Walter amassed an enormous fortune in the form of lands and royal pensions and rose to the rank of princely. He is one of the representatives of Countess Mathilde von Artois in the marriage contract of her daughter Blanka with the future King Charles IV. He ceded Châtillon and Crécy to the king and in 1302 bought the county of Château-Porcien . He was entrusted with numerous diplomatic missions. In 1307 he had the future Louis X crowned King of Navarre in Pamplona , brokered the peace between Charles of Valois and John I of Namur for the ownership of the county of Namur , and took part in several negotiations with England. As a confidante of King Philip VI. he led the negotiations in 1325 and 1326. In 1328 he commanded an army corps in the battle of Cassel .

His second marriage was in February 1301, Hélisende de Vergy († 1312), daughter of Jean de Vergy, lord of Fouvent , and Marguerite de Noyers , widow of Heinrich II , Count of Vaudémont . In March 1313, he married Isabelle de Rumigny († 1322), daughter of Hugo II and widow of Theobald II , Duke of Lorraine, in his third marriage . These two marriages remained childless. Walter von Châtillon was buried in the Pont-aux-Dames Abbey .