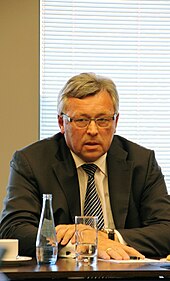 Werner Brinker studied civil engineering at the Technical University of Braunschweig after graduating from high school Johanneum in Lingen and received his doctorate there in 1990 . EWE joined EWE in 1978 in the area of ​​gas procurement / storage. In 1992 Brinker was granted power of attorney before moving to Preussen Elektra , Hanover , from 1993 to 1996 . Here he headed the main sales department. He then returned to EWE Aktiengesellschaft in 1996 as technical director. Since 1998 Brinker was chairman of the board of the EWE Aktiengesellschaft. In September 2014, the Supervisory Board of EWE AG announced that Matthias Brückmann would succeed Brinker as CEO on October 1, 2015.

As part of his work as Chairman of the Management Board of EWE AG, Brinker is involved as chairman of the Friends' Association of the German Business Foundation, is a member of the board of the Stifterverband für die Deutsche Wirtschaft as well as the Stifterverband für die Deutsche Wissenschaft, Landeskuratorium Niedersachsen. In addition, he is a member of the executive committees of the Federal Association of Energy and Water Management (BDEW) and the Association of Electrical, Electronic and Information Technologies (VDE), as well as chairman of the board of the forum for future energies. Since 1996 he has been involved in the Rotary Club of Oldenburg.

Werner Brinker was a member of the University Council of the Carl von Ossietzky University of Oldenburg between 2003 and 2013, and has since been chairman. Brinker has been teaching energy and technology as an honorary professor at the University of Oldenburg since November 2015. In addition, he was co-editor of the internet magazine klimaretter.info until summer 2012 , for which he also wrote columns on a regular basis .

On December 4, 2013, Brinker was awarded the University Medal of the Carl von Ossietzky University of Oldenburg. In October 2014 Brinker received the Great City Seal from the then Lord Mayor of Oldenburg, Gerd Schwandner, for his commitment to Oldenburg.

In September 2011, allegations became known that EWE had not adequately controlled spending on a prevention program at schools in Lower Saxony in the millions over several years. According to media reports, Werner Brinker is said to have always received the questionable bills personally, and he is also said to have known years before of allegations against the company to which EWE has transferred millions since 2000. A little later Werner Brinker admitted that when he took over shares in Stadtwerke Eberswalde in 2002, he paid the then mayor of the Brandenburg city in a letter 307,000 euros as a subsidy for the state horticultural show taking place there. The Neuruppin public prosecutor, responsible for white- collar crime, had investigated Brinker and another board member for granting advantages , but the investigation was discontinued in return for a corporate fine of 400,000 euros. In October 2011 it emerged that the entire Supervisory Board of EWE AG had not been informed of the fine . Brinker and the chairman of the supervisory board, Günther Boekhoff , called that "from today's perspective" a mistake. According to experts, however, it would have been the duty of the chairman of the supervisory board to inform the entire supervisory body and to hold the chief executive officer liable for the damage caused.