The meadow quail wheat ( Melampyrum pratense ) is an annual semi - parasite which , with its nodal-shaped suction organs, attaches itself to the roots of other plants, e.g. B. spruce , parasitic. Its name is not very appropriate as it almost never occurs in meadows.

The meadow quail wheat is 10 to 50 centimeters tall and blooms between May and August. Its flowers have lanceolate green bracts that have entire margins and are wedge-like and rounded at the base. The single flowers are in one-sided spikes, with the lower ones being distant. The 12 to 20 millimeter long crown is yellowish white to deep yellow in color, is club-shaped and forms a long straight tube. It can seldom be overrun with purple. The corolla tube is at least twice as long as the hairless calyx, the calyx teeth are almost adjacent. The capsule fruits have two columns and contain only a few seeds. 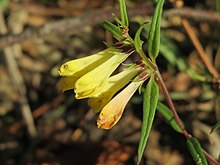 The chromosome number of the species is 2n = 18.

The meadow quail wheat grows in moderately dry, sparse deciduous, mixed deciduous and spruce forests as well as on their edges and in acidic dwarf shrub heaths . Calcareous soils are avoided. In Germany it is the most common quail wheat species with a wide distribution, but regionally only scattered, in some parts even rare occurrences. Overall, it is widespread from Europe to western Siberia.

In the Allgäu Alps, it rises at the Hüttenkopf east of the Koblachhütte in Bavaria up to 1965 m above sea level.

The plant species shows a special seasonal dimorphism . Depending on the season and environmental conditions, it can develop different ecotypes , which are often divided into vernale, aestivale and autumnal seasonal types and campicole and monticole height types. Taxonomically, these ecotypes are considered by some authors as subspecies, but their position is controversial.

The species is very rich in shape and forms few-branched summer and strongly-branched autumn forms. The most important subspecies can be distinguished:

The meadow quail wheat is an annual semi-parasite that uses nodular suction organs on the roots of other plants, e.g. B. parasites on spruce trees. In order to get to the water and dissolved nutrient salts against the suction power of the host, the plant has a particularly high transpiration rate and therefore wilts very quickly after being picked. During herbarization, the plants quickly turn almost black due to oxidation processes. The cotyledons remain as assimilation organs for a long time. The bracts carry extra-floral nectaries .

The flowers are "mask flowers " and are in spike-shaped, light-turning clusters. The pollen is smooth and dry and is scattered when touching the stamen appendages. Because of the up to 15 millimeter long tube, only bumblebees are successful as legal pollinators; In contrast, bees “break in”. Spontaneous self-pollination is also possible by curving the stylus to make the anthers . It has recently been proven that there are oversized anthers on the outside of the flower. The flowering period is between May and August.

The fruits are columnar, two-compartment capsules with only a few seeds . With two protruding calyx teeth, they are wind spreaders and animal spreaders. Spread by ants ( myrmecochory ) also occurs; these are attracted to the bracts by extra-floral nectaries until the fruit is ripe. The seeds are deceptively similar to ant pupae and germinate in the "ant nests". The fruit ripens between July and September. The seeds are short-lived cold germs.

Due to the aucubin content, all parts of the meadow quail wheat are slightly toxic. The seeds are particularly poisonous; you can z. B. be fatal to mice . However, poisoning has also been observed in herbivores. The black and blue color of the bread grain is also due to aucubin.