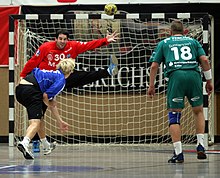 Yohann Ploquin, in the goal of VfL Gummersbach

Ploquin plays for the French first division side Pays d'Aix UC . The goalkeeper was in the French national team for several years .

Yohann Ploquin started playing handball at Aunis HB in his hometown before joining Girondins Bordeaux in 1996 . There he made his debut in the French first division. In 1998 he moved - like Jérôme Fernandez a year before him - to Sporting Toulouse 31 , the French cup winner at the time. After the injury of VfL goalkeeper Goran Stojanović , Yohann Ploquin moved to VfL Gummersbach in the handball Bundesliga on August 11, 2008 . After ten weeks with the Oberbergische, he moved to BM Aragón after the comeback of Goran Stojanović . From the summer of 2009 he was under contract with the French club Saint-Raphaël Var Handball . Four years later, Ploquin joined league rivals Pays d'Aix UC . From summer 2015 he is under contract with Chartres Métropole Handball 28.