The pulp and paper mill Rosenthal GmbH (short ZPR ) is a company dedicated to the manufacture of pulp has aligned. It is located in the Blankenstein district of Rosenthal am Rennsteig in the state of Thuringia an der Saale near the state border with Bavaria . The plant is one of the most modern in Europe. The company is part of the Mercer Group . The ZPR is one of the largest employers in the region. The company has appeared in public as Mercer Rosenthal since around 2019 .

The company was founded in 1882 by Anton Wiede under the name Wiedes Papierfabrik Rosenthal (WPR) . In 1891, chemical-based pulp and high-quality specialty paper began to be produced. In 1894, Wiede acquired the neighboring Blankenberg paper mill . After the beginning of the 20th century the company expanded, production and profits increased. In the years after the First and Second World War , the plant was expanded continuously.

In 1976 a new sulphite cellulose production plant was built, which corresponded to the state of the art at the time. This enabled production to be increased further. 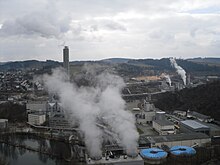 Panorama of the plant

In 1994 the plant became part of the Mercer International Group. While the old plant was shut down in 1999 , the construction of a new plant began in 1997 as part of the conversion to a more environmentally friendly sulphate process . This went into operation in 1999. The plant was the first pulp plant in Germany to use the Kraft process . The plant is one of the most modern in the world. Since 1994, more than 500 million euros have been invested in converting and modernizing the plant.

The ZPR handles up to 1,500 tonnes of pulp across Europe every day. The pulp is shipped twice a day by rail. The share of rail shipments was gradually increased to around 90% (2017). In 2017, a rail terminal for the acceptance of logs went into operation. This is also intended to increase the rail share in the area of ​​delivery.

The ZPR employs 365 people and 14 trainees (as of December 31, 2017). Up to 360,000 tons of pulp are produced annually in the plant. ZPR's sister plants are Zellstoff Stendal and Zellstoff Celgar in Canada . The plant in Rosenthal is the weakest within the Mercer Group.

In 2007, a capacity expansion study was carried out that would allow pulp production to be expanded up to 400,000 tons per year. The cost of this expansion is 100 million euros.

The ZPR has expressed interest in reactivating the Höllentalbahn , which was closed at the time due to the division of Germany and which forms the connection between Thuringia and Bavaria. This is justified with a poor delivery connection to Bavaria.

Dismantling of the old plant

From August 2008 preparations were made for the dismantling of the 175 meter high chimney . Originally, it should have been demolished by the end of 2008. A special excavator tore down the chimney from above because, in contrast to the second chimney that was in place until 1987, no blasting could be carried out due to the unfavorable location of the chimney. Some residents of Blankenstein pleaded for the chimney to be left standing, as in their opinion it was a landmark of Blankenstein.

At the beginning of February 2009 the chimney was torn down to a height of 90 meters. From this height, the 6.5 ton excavator was replaced by another 16 ton and larger excavator. The reason for the exchange was that from this height onwards, the chimney brickwork thickened from 25 to 65 centimeters. The forge was eight meters in diameter. The demolition work dragged on for a total of six months. The demolition resulted in a total of 4,500 tons of building rubble; around four meters were removed per day. The demolition work was completed in April 2009. 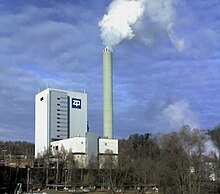 Lye boiler of the plant

The ZPR has an annual wood requirement of 1.8 million solid cubic meters , of which two thirds are used as wood chips , a by-product in the sawmill , and one third as round wood for pulp production. Mostly spruce and pine wood is used . This comes mainly from the Ore Mountains , the Thuringian Forest , the Franconian Forest and the Fichtel Mountains , but also from the Czech Republic and Poland.

The system's cooker is 65 meters high. Production is fully automated there. The wood chips are cooked in the cooker for four hours at 160 ° C. This is done in an alkaline solution. This creates an aqueous pulp suspension which is then cleaned and bleached. The bleaching is carried out either in the ECF process ( elementary chlorine free = without the use of elemental chlorine ) with hydrogen peroxide , oxygen and chlorine dioxide or totally chlorine-free TCF method ( total chlorine free ) with hydrogen peroxide, oxygen and ozone . After bleaching, the pulp is pressed in order to pre-dry and later dried with a thermal dryer. The pulp is then sent to the converting line, which is part of the bale line. There the pulp is cut and stacked into bales weighing 250 kg.

The lye line is connected to the fiber line in a closed chemical cycle. The plant is in operation parallel to pulp production. The chemicals are processed in the plant and later added back to the cycle. The efficiency of the liquor boiler system is 99%. The organic components of the lye, consisting of wood residues, are burned and the resulting heat is passed on to a steam turbine in a second water-steam circuit . A generator with a nominal output of 57 MW is connected to the steam turbine .

In 2014 a new plant for the production of tall oil was put into operation. This enables the company to produce a valuable biochemical from the resinous substances in wood, which can replace products made from petroleum. Tall oil can be used for paints and varnishes, but also as a raw material for biodiesel.

Even before the conversion to the power process in 1999, the Rosenthal pulp and paper factory occasionally generated excess electricity that was sold. Surplus electricity has been generated continuously since the renovation. The fuel normally consists of wood residues, a renewable raw material. The electricity generated with it is considered bioenergy .