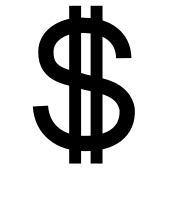 The dollar sign $ (also known as the peso sign ) is a currency symbol . It is shown as a capital S with one or two vertical bars and is used to denote a variety of currencies , see List of Dollar Currencies .

The symbol, originally a weight symbol for gold, was initially used for the Spanish - Mexican peso ( piasters ). From Mexico it was adopted by the United States with the word " dollar " with the introduction of the US currency in the 1780s and 1790s . The original function as a gold standard was pushed back.

The symbol is used today as a universal currency symbol for all currencies called dollars or pesos, often together with a letter abbreviation so that uniqueness is guaranteed (for example US $ ). In addition, it is or was used for the Bolivian peso boliviano , the Malay ringgit , the Nicaraguan cordoba , the Portuguese escudo (with two dashes, see Cifrão ), the Samoan tala , as well as for the Tongan pa'anga .

The symbol first appeared in manuscripts in business transactions between Mexico and the British colonies of North America to mark the Spanish currency by the 1770s at the latest . The origin cannot be clearly proven, but it is likely that it developed over the course of time from the handwritten abbreviation Ps for peso (s) or piastres (originally measures of weight). 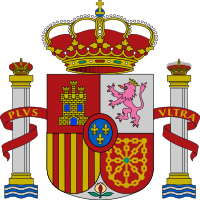 The pillars of Heracles on the coat of arms of Spain

Another theory explains the origin of the character from the old Portuguese cifrão , a number separator that was also written as S with two vertical bars. It is less likely that the sign arose from a ligature , as is the case, for example, with the pound symbol £ (a combination of the letters l and b). The assumption that the sign originated in the young United States and that its origin was a dashed abbreviation s for the British currency shilling or the British spelling “8 /” for eight shillings (in some US States the value of one peso) is probably wrong.

Another theory favors the development from the abbreviation “P8” for the peso, which had a value of eight reals. A common “ Spanish dollar ” at that time was an 8 reales coin, called a “piece of eight” in literature, often under the English name “pieces of eight.” The thesis that $ comes from the Roman abbreviation IIS or HS for the Roman coin sesterce , is considered refuted, although the early United States gladly borrowed from ancient Rome ( Capitol , Senate ).

Another theory says that the dollar sign comes from a stamp on the silver coins from the colonial city of Potosí in today's Bolivia. For this purpose, the letters P, T and S in the name of the city were simply superimposed on one another and so the label for 'made in Potosi' was created, so to speak. The mountain Cerro Rico on the outskirts of the city supplied the ores such as silver and copper, which were coveted for this purpose and were mined under inhumane conditions. Mainly because of the high quality and purity of the silver, these coins were highly valued worldwide and stood for a valuable currency.

Due to the early standardization of the character in character sets and the resulting presence on keyboards for terminals and computers , the character was also used as a syntactic element in programming and data processing languages .

In miscellaneous symbols and pictographs 1F4B2 a highlighted dollar sign (?) was introduced under Code U +.