from Wikipedia, the free encyclopedia
13 Vendémiaire
Part of: French Revolution and War of the First Coalition 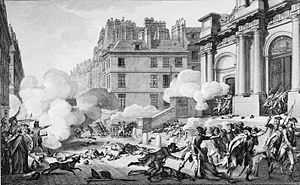 Napoleon Bonaparte defeats the royalist uprising, 13 Vendémiaire, in front of Saint-Roch in Paris
Battles and sieges of the
First Coalition War (1792–1797)

13. Vendémiaire (October 5, 1795 in the French Revolutionary Calendar ) is the name of a confrontation between the troops of the French First Republic and royalist troops on the streets of Paris . The royalists tried to come to power after the proclamation of the Constitution of Year III, but an artillery battery led by General Bonaparte suppressed the insurrection in the innermost districts of Paris.

With the fall of Robespierre and the Jacobin Club on Thermidor 9, 1794, the French Revolution had not calmed down . In order to prevent the possible resurgence of reactionary parties in the upcoming elections, a new constitution was passed in Paris on August 22, 1795 by the National Convention determined by Thermidorians . Another decree of August 30 ruined the hopes of constitutional reaction supporters of coming to power in the next election. The supporters of the monarchist restoration considered the uprising. At the end of September, several Paris electoral sections appointed their own deputies to form an electoral assembly that met at the Odeon. The National Convention recognized the danger; General Menou was given command of the Interior Army and the task of securing the capital. But he only had 5,000 soldiers on hand, while the royalists had 30,000 supporters. General Danican took command of the newly appointed National Guard in the anti-republican section Le Peletier . On the evening of the 11th Vendemiaire, seven sections already declared themselves ready to riot: In addition to the Le Peletier section , Butte des Moulins , Contrat-Social , Théâtre-Français , Brutus and Temple et Poissonnière .

On October 4th, the Convention ordered General Menou to advance with his corps to Le Peletier and to disarm the entire area there; Reinforcements under Despierres and Verdière were promised. The assembly of the Le Peletier section declared itself to represent the sovereign people and refused to obey the requested disarmament. After an hour, General Menou had to withdraw without success. In order to defend itself against the new military power, the convention gave full powers to an extraordinary commission of five members. On behalf of the Convention, Barras organized the resistance against the uprising. For his part, Barras commissioned the general of the artillery Bonaparte, who distinguished himself in the siege of Toulon , to put down the uprising.

Course of the 13th Vendémiaire

The general march was struck in all quarters; the troops of the insurgent sections occupied the exits of the important roads and enclosed the palace and the garden of the Tuileries . At 1 a.m. General Bonaparte sent Captain Murat , the escadron chief of the 21st Chasseur Regiment with 300 riders, to occupy the Sablons arsenal in Neuilly and to take the weapons to the Tuileries Garden, where the troops of the sections were already gathering. The Convention's army consisted of 5,000 men and 40 guns at 5 a.m. Napoleon left his cannons on the bridge of Louis XVI until 9 a.m. , at Pont Royal , Rue de Rohan , Cul de Sac de Dauphin , Rue Saint-Honoré and the swing bridge; Reserves were kept ready on the Place du Carrousel . While fruitless discussions a certain Elisha Lafond operated for the associations of the Section Le Pelletier at the head of three battalions that afternoon by 14 clock on the Pont Neuf concentrated. An equally strong column of insurgents came from the Odeon and both joined on the Place du Dauphine . General Caretaur, who had orders to defend both sides of the Pontneuf bridge , then withdrew through the Louvre . The National Theater, the Church of St-Roch and the Hotel de Noailles were heavily staffed with National Guards. Bonaparte had 500 rifles brought into the convention hall to arm the members and the offices as a reserve. At the same time the column was advancing under Lafond over the Quai Voltaire towards the Pont-Royal . At around 3 p.m. Barras finally ordered fire to be opened; the facade of the church of St-Roch was hit several times. With the artillery standing in front of the Pont-Royal , the rebel column was quickly disordered and disbanded. In the end, Bonaparte's departments cleaned up the streets of St-Honore , St-Florentin and the neighboring towns.

Two of the ringleaders captured, Lafond and Soulé, were executed on October 13 and 15. The victory of the republic on the 13th Vendémiaire played an important role in the military rise of General Napoleon Bonaparte . On October 12th the first elections began and on October 31st the first board of directors was elected. Control of the executive passed into the hands of five elected directors. Its members were elected by the Council of Elders from a list submitted by the Council of Five Hundred .