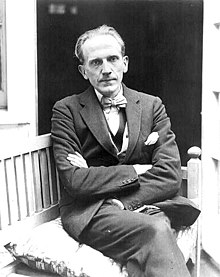 In addition to humorous essays and plays, Milne mainly wrote children's books, including the world-famous stories of Pooh the Pooh in the 1920s for his son Christopher Robin (born August 21, 1920 in Chelsea , London; † April 20, 1996) .

Milne grew up in London. There he attended a private school in Kilburn, which was run by his father John Vine Milne. One of his teachers was HG Wells . Alan Alexander attended Westminster School and from 1900 Trinity College at Cambridge University , where he studied with a mathematics scholarship (BA 1903 after regular study time). There he also worked as an employee of the student magazine Granta . He wrote together with his brother Kenneth, the articles were therefore signed with the initials AKM . Through his work, the British satirical magazine Punch became aware of him and so he became an employee, later assistant editor and from 1906 co-editor of the paper. However, he had to give up his studies, which he never took up again. Milne later always referred to himself as a "freelance journalist".

In 1913 he married the goddaughter of the Punch publisher, Dorothy (Daphne) de Selincourt. In 1920 his son Christopher Robin was born. During the First World War , AA Milne served in the British Army as an intelligence officer on the Somme in 1915 , but soon after his arrival at the front he fell seriously ill and was then retired. After the war he denounced in his work Peace with Honor ( peace with honor ) war as a "senseless massacre" and "crime against human reason" to. A little later, his first children's book, Once On a Time , appeared in which he mocked the war.

In 1925 Milne bought Cotchford Farm , a country house in Hartfield, East Sussex . There he retired in 1952 after a brain operation. Milne died on January 31, 1956. At the memorial service, the legendary song of Pooh the Bear was sung ("How sweet to be a cloud"). This house hit the headlines again on July 3, 1969 after Brian Jones was found dead in the pool.

The most famous of his works revolves around a boy whom he named after his son Christopher Robin . A model for this, Winnie the Pooh (in the original Winnie-the-Pooh ), the cuddly toys of his son and the were black bear "Winnie" in the London Zoo . The stuffed animals are on display in New York today . The overwhelming success of the book (translations into 40 languages ​​in the first ten years since its publication alone) was a burden for Milne, as it was his self-imposed goal to write what he wanted to. Before that, he had always had to discuss changes in direction with his publisher. He had received positive reviews as a playwright, he had written detective stories like The Red House Mystery - a change in the direction of children's author was initially unpleasant news for the publisher. Milne wrote novels and short stories until the 1930s, but his works have recently been received less enthusiastically. His last comedy, premiered in 1938, was a definite failure. After that he wrote only three small and rather insignificant plays. He dedicated several poems to his son Christopher Robin, which later appeared in two volumes (1924 When We Were Very Young and 1927 Now We Are Six ), with When We Were Very Young there were several luxury editions, settings and even a parody (1926 When We Were Rather Older ).

After Christopher Robin Milne's death, his widow sold the rights to Pooh Bear to The Walt Disney Company .

Two of his works have been published in Germany as radio plays.