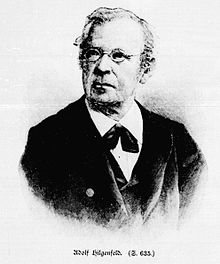 Hilgenfeld was the son of pastor Johann Christoph Hilgenfeld (1795–1879), whose ancestors were in turn mill owners in Krüden . In 1854 he married the daughter of the chief preacher Gottfried Wolterstorff in Osterburg (Altmark) Luise (1826–1868), who came from an old family of pastors in the Altmark. This marriage resulted in three children: the Dortmund high school professor Rudolf (born 1857), Berta (1859–1935, unmarried) and Heinrich Hilgenfeld (1862–1945), high school professor in Jena and lecturer at the university. After the death of his first wife, Adolf Hilgenfeld married Eugenie Zenker (1830–1909), the daughter of the natural scientist Jonathan Karl Zenker , professor in Jena. The family moved into the house of the uncle von Eugenie, the founder of the educational institute for boys, Gustav Zenker (1808–1875), the Frommann property on Fürstengraben.

There is an estate in the Tübingen University Library .