Allmannsweier is a district of the Schwanau community in the Ortenau district in southern Baden . 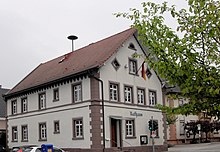 Allmannsweier was founded by the Alemanni . In 1016 the place was mentioned as Almensweiler for the first time in a document from Emperor Heinrich II , in which the ruler transferred goods to the Schuttern Monastery, among other things, in what is now Allmannsweier.

In the following centuries, the rulership of goods in Allmannsweier and the whole place changed very often without this having a lasting effect on the place. Only the fact that Allmannsweier belonged to what was then the Free Imperial City of Strasbourg in the 16th century still influences the place today because it converted to Lutheranism following the decision of Strasbourg .

On July 1, 1972, Allmannsweier joined forces with the neighboring towns of Ottenheim and Nonnenweier to form the new municipality of Schwanau as part of the municipal reform in Baden-Württemberg in order to operate the public administration more economically.

The parish, which has been closely interwoven with the town for centuries, has a baroque style church built between 1781 and 1873 with a striking double slate dome. The organ of the master organ builder Blasius Schaxel from Herbolzheim is used today not only for church services, but also for organ concerts.

In addition to the church and its tower, which is unique in the area, the core of the site is characterized by a large number of very well-preserved half-timbered houses and also by single-family houses, especially from the post-war period. The large factory halls and administration buildings of Herrenknecht AG, located between fields, act as a contrast.

The place is the seat of the main plant of Herrenknecht AG, the world market leader in tunneling machines with over 1000 employees on site who manufacture the hydraulics and electronics of the machines.