The Reichsabbey Schuttern was a Benedictine monastery in Schuttern (today part of the community Friesenheim in the Ortenaukreis in Baden-Württemberg ).

There are no sources of information about the foundation of the Schuttern Monastery - according to its own monastic tradition in 603. An early medieval cell, which is named after an unidentifiable Offo Offoniswilare or Offoniscella , is likely to refer to the Christianization of the country on the right bank of the Rhine from Alsace in the run-up to the diocese of Strasbourg, to the effect of the Irish-Scottish mission and thus to the 7th, if do not go back to the 6th century. The further history of the monastery property in Ortenau and Breisgau suggests an interdependence with the Alsatian ducal family of the Etichones and the noble families associated with them, even if the monastery itself was placed under the protection of the empire, possibly only in Carolingian times. On the site of the monastery itself there was a Roman settlement, probably a larger and representatively furnished villa rustica from the 4th century AD, from which the spoils were reused in the construction of the monastery church and the construction of the graves.

The monastery was placed under the Benedictine rule by Pirmin between 746 and 753 and gained an important economic position in Carolingian times, so that in 817 it is in second place in the chapter of Louis the Pious about the army of the imperial monasteries after Lorsch . At the same time, a highly qualified writing school was maintained here, as evidenced by a gospel book commissioned by Abbot Betrich and written by Deacon Luithar, which is now in the British Library in London.

Possibly it is due to the turmoil of the late Carolingian period that the monastery became completely impoverished and that its property later found itself almost entirely in the hands of the von Geroldseck family. Only with the disempowerment of the Etichones as dukes of Alsace does the influence of royalty seem to be able to reassert itself; Otto II granted the monastery an immunity privilege in 975 , which freed it from the jurisdiction of regional secular powers. In 1007 the later Emperor Heinrich II. Gave Schuttern together with Gengenbach Monastery to the newly founded diocese of Bamberg , and during his visit in 1016 he gave him the neighboring parish church of Friesenheim because of his great poverty . If ever there was really any reference to a monastery founder Offo, this tradition was suppressed during this time; the monastery appears from 1025 under the name Schuttern (Scutera). Whether there is a substantive and traditional connection between the reorientation of the monastery as Bamberg's own monastery, the name change and the motive of the fratricide of Cain and Abel on a floor mosaic laid out at the beginning of the 11th century - the oldest of its kind in Germany - at the place of the memoria , must remain open. 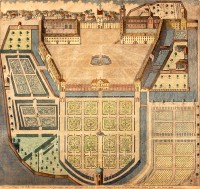 Numerous fires hit the monastery in the 12th and 13th centuries and, in addition to the Romanesque monastery buildings, probably also destroyed most of the documentary tradition.

The documentary evidence of the monastery bailiwick begins with the year 1235 , about which one can only speculate in the previous time. There is no evidence that the dukes of Zähringen, as owners of the Ortenau county, exercised the bailiwick before 1218. On the other hand, it can be assumed that the von Geroldseck gentlemen were already abusing bailiwick rights to a considerable extent before 1235 to appropriate monastery property. After the death of the Lords of Geroldseck in the Diersburg line, the bailiwick fell back to the main house of Geroldseck in the Hohengeroldseck line in 1278 and was from then on under the influence of the political turmoil emanating from here. The Vogteirechte served as a basis for the Geroldseckers to build a castle in the Schuttern settlement, which has meanwhile been elevated to a town, which they used as a base during the period of the Habsburg-Wittelsbach dispute for the throne. In response to this, the monastery and town were destroyed by the citizens of Strasbourg in 1334–35 . The Geroldseck inheritance disputes in the 15th century affected the monastery as well as the Peasants' War in 1525, until it was finally reduced to rubble by a major fire in 1548. The city rights were lost again in this turmoil.

In 1490 Schuttern joined the Bursfeld Congregation and belonged to it until 1623.

With the political orientation towards Austria , the abbot of the monastery, which continued to belong to the Bamberg Church, practically became a member of the Upper Austrian provinces at the end of the 17th and beginning of the 18th century. The tower of the baroque church was built in the years 1722-23 under Abbot Placidus II. Hinderer (1708-1727). The construction is attributed to Peter Thumb , even if there is no evidence for it. In 1743 the Austrian military put down unrest among the Schuttern farmers. Under Abbot Karl Vogel (1753–1786) the monastery flourished once again, during which 1767–72 today's baroque church was built by the builder Joseph Michael Schnöller . The interior decoration was made by the plasterer Christian Eitel in 1770, where Marie Antoinette , daughter of Maria Theresa and future wife of the French heir to the throne Louis XVI, stayed. , on her journey from Vienna to Versailles for the last time on German soil. In the Peace of Luneville in 1801, Schuttern, together with the Austrian Breisgau, became the property of the Duke of Modena and then in the Peace of Pressburg in 1805 to Baden . The monastery, owned by the Johanniter in 1803 , was closed by Baden in 1806. The baroque monastery buildings, which shortly before had given him the splendor of a small baroque residence, were demolished and the monastery church became the parish church of the village of Schuttern.

The only remnant of the old monastery is the baroque parish church Mariae Himmelfahrt , visible from afar , in whose basement the remains of the Ottonian floor mosaic of Cain and Abel are visible. The tower of the church was built in 1722 under French style influences, and the nave followed from 1767 to 1772. Its crossing dome was demolished in 1821, and a fire destroyed the baroque furnishings in 1853. The current appearance goes back to the total restoration of the church at the end of the 1970s, during which extensive archaeological investigations were carried out.