Town hall in the center

Chancellery and tithe barn of the imperial abbey

The place has 1430 inhabitants and is located in the Upper Rhine Plain between Offenburg in the north and Freiburg im Breisgau in the south, i.e. at the foot of the Black Forest .

The history of the place is closely linked to the history of the Schuttern Monastery . Schuttern Monastery is said to have been founded in 603 by a Scots monk , an English prince of royal blood, named Offo . Around 100 AD the Romans built the military road from Augst near Basel to Mainz. This street crossed the area of ​​today's municipality of Friesenheim. In the 3rd century the Alemanni / Celts took possession of the Upper Rhine region. With the occupation of the Franks in the 7th century, the supremacy of the Alemanni was lost. The Franks introduced a new state constitution and formed the Gau "Mordenaugie" (Ortenau). The Schuttern Monastery, at that time still called “Offoniswilare” or “Offoniscella”, also dates from this time. The sovereignty of the community came through the monastery bailiwick first to the diocese of Bamberg , from there to the imperial bailiwick and finally to the Geroldsecker. In 1016, Emperor Heinrich II gave a village called Routgereswilre (hamlet of Rüdiger, today Heiligenzell) and a hat in another place called Friesenheim to the poor monastery of Offo, called Zell . With the Geroldsecker line, Friesenheim was also divided up in 1278. In 1502 the margraviate of Baden was able to acquire three quarters of the sovereign rights of the municipality of Friesenheim by purchasing them. In 1629 Baden was awarded all rights to Friesenheim. Since then, the people of Friesenheim have been subjects of Baden. In 1525 the Peasants' War broke out. Insurgent farmers from Lahr and Friesenheim devastate the Schuttern monastery. The region was largely spared from the Thirty Years' War (1618–1648). The future French Queen Marie Antoinette spent her last night on German soil on her honeymoon from Vienna to Paris on May 6, 1770 in Schuttern Monastery. As part of the secularization , the Schuttern Monastery closes on August 31, 1806. The Grand Duke of Baden became the owner of the monastery. The state of Baden-Württemberg is still obliged to build the church.

The moated Schuttern castle existed from the 15th to the 17th century.

The appearance of the town is shaped by the remains of the old imperial abbey , especially the monastery church. This is based on previous buildings, but was largely rebuilt in the Baroque style in the 18th century . The church tower has the highest campanile of the Archdiocese of Freiburg after the Freiburg Minster . In addition to the church, which was used as the parish church of Mariae Himmelfahrt after the secularization in 1803 , only a few parts of the once extensive monastery complex remained. This includes today's rectory, once part of a large convent building as a refectory , as well as the chancellery and the tithe barn , plus some ancillary buildings. Together with the monastery walls, some of which are still high, these buildings stand on today's main street in Schuttern. Most of the monastery complex disappeared in the 19th century.

A restored Roman road station is located east of the village . 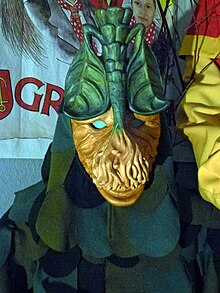