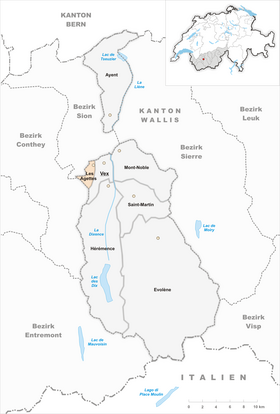 Les Agettes (until 1965 officially Agettes called) is a parish of the deanery customs and a village in the municipality morals and is in the French-speaking part of the Swiss canton of Valais . Until December 31, 2016, it was an independent political municipality in the Hérens district .

Les Agettes is located in the central south of the canton of Valais and, at 5.1 km², was the smallest municipality in the Hérens district. The village is located above the southern slope of the Rhone Valley , 12 kilometers from Sion . The former municipality was made up of the settlements Crête-à-l'Œil, La Vernaz and Les Agettes, which are located at an altitude between 980 and 1200 meters.

The first mention is based on the name Agietes and is from the year 1190. The name changed to Gieti . Since 1964 the municipality has been called Les Agettes , before that Agettes . A community of the men of Agette and Vernaz is confirmed at the beginning of the 14th century. From the 12th century onwards, Les Agettes belonged to Vex . In 1382 there is a mistral and in the 14th century a village community with La Vernaz is occupied.

The 1st sector lost weight in the 20th century in favor of the 2nd sector and later the 3rd sector (88 percent of the workforce in 1910, 75 percent in 1941, 1.8 percent in 1990). The tourist development and the proximity to Sion brought about a stabilization of the population.

On January 1, 2017, Les Agettes merged with the municipality of Sion and thus moved from the Hérens district to the Sion district .