This article explains the former political municipality in Switzerland, for other meanings see NAX . 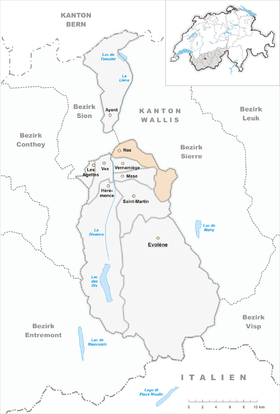 Nax is a civic community with a civic council and until December 31, 2010 was a political municipality in the Hérens district in the French-speaking part of the canton of Valais in Switzerland .

Nax is located on the north side of Mont Noble above the Rhone Valley . The neighboring municipalities of Nax are Vernamiège , Mase , Saint-Martin , Grône , Anniviers and Sitten .

The local economy is shaped by agriculture. To develop a modest tourism and on private initiative a swing golf course was built.

A chair lift leads to the Dzorniva middle station below Mont Nobles . From there, two chairlifts built in 2012 and a ski lift on the west side of the mountain open up a small ski area with 30 km of marked ski slopes.