The following important information is missing from this article or section:
Culture, infrastructure, economy, ...
Help Wikipedia by researching and pasting it .

Saint-Martin is a political municipality and a civil parish in the Hérens district in the French-speaking part of the canton of Valais in Switzerland . 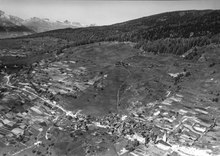 The parish was formed in 1882 when Hérens was divided into Evolène and Saint-Martin VS.

See also : List of cultural assets in Saint-Martin VS

Commons : Saint-Martin VS  - Collection of images, videos and audio files