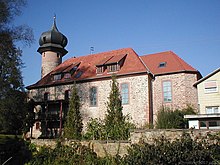 The Old Catholic Church in Lohrbach , a district of Mosbach in the Neckar-Odenwald district in northern Baden-Württemberg , goes back to the former wine press of Lohrbach Castle from the 16th century, which was converted into a Catholic church in 1763. After part of the ceiling collapsed in 1966 and the subsequent construction of a Catholic church elsewhere in Lohrbach, the building was profaned and converted for residential purposes.

In the years 1576 to 1599 was Castle Lohrbach the widow seat of Electoral Princess Amalie, the second wife of Kurpfälzer Elector Friedrich III. who had initiated extensive renovations to the castle to create a palace complex in the Renaissance style and partly also carried out his government business from Lohrbach. Around 1585 a larger building was erected on the moat to the northeast of the actual core castle. The attached circular stair tower in front of the north-western narrow side and a renaissance portal indicate that the building was originally used for residential purposes. In 1649 documents speak of a large new building next to the moat , with a badly useless inner building, but a good wide roof, with a stately wine press inside, a pretty cellar below and two good fountains inside . The building had meanwhile been converted into a farm building with a wine press .

When the church in the Electoral Palatinate was divided in 1705, the original church of the place came to the Reformed community. The Catholics then held their services for some time in a specially prepared room in the basement of the castle. In the years before 1757, Elector Karl Theodor bequeathed the wine press building to the Catholic community in order to set up a church. By 1763, the building was converted into the local Catholic church according to plans by the builder Franz Wilhelm Rabaliatti . In 1759 a stone crucifix was erected on the church, in 1763 there was a preliminary inauguration of the church, in 1766 an organ was ordered from Johann Adam Ehrlich in Wachbach, in 1777 the church was formalized with the laying of relics of St. Placidus and St. Justinus in the altar inaugurated.

In 1864 there were three bells cast by the Bachert bell foundry in Dallau in the church . In 1896 the old organ, which had been described as neglected years earlier, was only good as firewood, which is why a new organ built by Heinrich Voit in Durlach was procured. In 1901 a sacristy was added to the side of the church , and in 1907 a choir was added to the building on the south-eastern narrow side . At the end of this extension, the nave was repainted.

During the First World War, the tin organ pipes and one of the bells had to be delivered. In 1925 there was still a C bell and an Eb bell. The C bell also had to be delivered during World War II. In 1952 three new bells were cast by Friedrich Wilhelm Schilling in Heidelberg, whereupon the old Es bell came to Sattelbach in 1954 , where a new Catholic church was consecrated in 1955.

At last there were three altars in the church. The high altar in the choir showed a crucifixion scene, to the left of the choir there was a Marian altar, to the right of it a Joseph altar. The church was decorated with other pictures and figures, including two old unframed paintings on the choir walls, a figure of Mary from 1761 above the entrance to the sacristy (copy of a figure from the Abbey of Mariä Einsiedeln) and on the side walls of the nave one by the local chaplain Josef Walz painted station of the cross, consisting of 14 pictures, from 1939.

Over time, the Catholic community owned other buildings. In 1769 she acquired a building as a rectory, later also the associated garden and a summer house. The community also owned a denominational school house, which was sold in 1885. The old rectory was sold in 1961 and a new rectory was built in the same year.

In 1966 part of the ceiling of the church collapsed, after which the decision was made to build a new church. A new Catholic church was then built at Lohrbacher Friedhof. The old church building near the castle was renovated, profaned and converted for residential purposes.