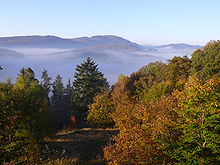 Indian summer in the Sauerland

Indian summer is the name for a meteorological singularity . It is a phase of uniform weather in autumn, often at the end of September and October, which is characterized by a stable high pressure area and a warm end to summer . The briefly drier weather allows good visibility, intensifies the fall of leaves and the discoloration of the leaves.

The origin of the word is not certain, especially since in addition to the term Indian summer, there are also numerous others such as similar summer, women's summer, girl's summer, Mettensommer, Mettkensommer, Metjensommer, post-summer, widow's summer, Michael’s summer, Martin’s summer, all Saints’s summer and flying summer , which complicates the linguistic history.

According to one explanation, the name is derived from the spider threads with which young canopy spiders soar through the air in autumn (see Spider Flight ). The thread that the spiders produce and on which they float through the air reminds people of the gray hair of old women. In Old High German, "weiben" was used to describe the weaving of cobwebs . According to the other explanation, in which Kluge / Seebold sees the “perhaps” original meaning, whereas Pfeifer sees it “more likely” a secondary meaning, the word is the motive of second youth in women, which is seen as untimely and lasting only for a short time , based. The Swiss widowsömmerli and the Bavarian similarsummer ('grandfather summer') can be connected to this latter interpretation , but perhaps the picture of the old, weak summer is also present.

Other terms for the phenomenon of the mild autumn days can be interpreted more easily, but in some cases they are merely further secondary interpretations of the - uncertain - original meaning. In northern German dialects, for example, the Indian summer is called Mettkensommer and similar, the Indian summer threads Metten, Mettken or Mettjen . There is a diminutive of maggot , that is, it was taken for caterpillars. Because of the phonetic similarity, this term was probably reinterpreted as girls in folk etymology . The words (St.) Michaelssommer (September 29th), All Saints' Day (November 1st) and (St.) Martinssommer (November 11th) refer to certain days .

The Darmstadt District Court has determined in 1989 that the use of the term Indian summer by the media whilst respecting the privacy rights is of older ladies.

Indian summer in other languages

In North America, especially in the New England states , this weather condition is called Indian Summer ( Québec : été indien ) - in German it is often confused with the autumnal color of the leaves. In France, the term été indien was popularized in 1975 by a song of the same name by Joe Dassin . In the past people spoke of été de la Saint-Denis ( October 9 ), été de la Saint-Géraud ( October 13 ) or été de la Saint-Martin ( November 11 ).

Similarly, in Finland one speaks of Ruska-Aika (time of brown color) and in Sweden of brittsommar (Birgitta summer). In Scandinavia there are also phenomena of the emerging polar night . In the transition phase from the midnight sun to the polar night, late summer with its magnificent foliage makes excursions into nature particularly attractive. For many local nature lovers, the Ruska season is the highlight of the year and the trigger for intensive tourism in northern Lapland , the northernmost part of Europe on the Arctic Circle .

In the Mediterranean countries, the late warm period, there in November, is known as St. Martin's Summer .

In Turkey the weather period is called pastırma yazı (Pastırma summer). Pastırma is a dried fillet of beef, surrounded by a spicy paste, which is prepared by Turkish butchers in late summer and traditionally hung to dry under the roof in the warm air.

In Japan, a warm late summer is called a "little spring" ( koharu小春). The following Momijigari describes the custom of visiting landscapes and parks with beautiful autumnal foliage, especially of maple trees and forests, in pleasant autumn weather.

In popular belief, the cobwebs of the canopy spiders were also believed to be webs of elves , dwarves or norns . The virgin Mary , who, together with 11,000 virgins, would cover the country with silk every year around this time, was also considered to be responsible. Hence the names of these spun threads such as Marienhaar, Mariengarn, Marienfaden, Marienseide, Herbstgarn, Summer silk, Herbstfäden, Liebfrauenfäden, Our Lady Web, Mother of God Web .

In popular belief it was assumed that if the threads were attached to man's clothes it would bring good luck, and whoever carried them around would become famous. Likewise, it promises to be an imminent wedding if flying threads get caught in a young girl's hair.

The Indian summer has found its expression in various peasant rules that promise good weather and suggest a pleasant autumn.