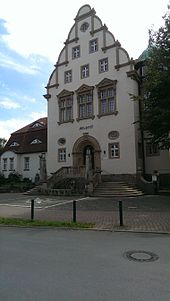 The Lünen District Court is a court of ordinary jurisdiction with its seat in Lünen . It is one of the district courts sponsored by the state of North Rhine-Westphalia . The courthouse was entered in the list of monuments of the city of Lünen on September 20, 1985.

The district court is responsible for the cities of Lünen, Selm and Werne in the Unna district . Around 147,000 people live in the 196 km² judicial district .

Local courts in the regional court district of Dortmund