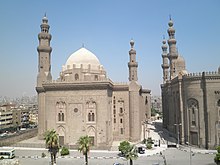 The Sultan Hasan Mosque in Cairo

After the dismissal of his brother al-Muzaffar Hajji I , the minor an-Nasir Hasan (he was probably only eleven years old) was raised to sultan in December 1347, for whom a junta of Nasiri emirs , including Vice-Regent Baybugha al-Arus, Vizier Manschak al-Yusufi and Emir Taz an-Nasiri, who took over the administration of the country including the state treasury. It forced the resale of numerous Circassian mamluks that had only recently been acquired and drastically cut spending on the royal household as part of a general austerity program. The reserves that an-Nasir Hasan's father, Sultan an-Nasir Muhammad I , had amassed were now completely exhausted and the regime's financial problems were to be exacerbated a few months later by the spread of the plague .

As in Western Europe, the plague was brought into Egypt by merchant ships from the Black Sea . Due to insufficient flooding of the Nile and a subsequent famine, the population was already weakened, which further promoted the spread of the disease, which is puzzling to the people. The first people died in Alexandria in autumn 1347, and by spring 1348 the plague had spread throughout the entire Nile Delta . In the autumn and winter of the same year it reached Upper Egypt and Syria , where it raged until February 1349. Overall, around a third of the total population of Egypt and Syria fell victim to this first major epidemic, with the ruling Mamluk elite being relatively little affected due to better nutrition and health. Sultan an-Nasir Hasan himself avoided the plague in his summer residence Siryaqus north of Cairo . But while z. For example, the population, trade, agriculture and handicrafts recovered in Western Europe in the course of the following century, reached Egypt because of the frequent recurrence of the epidemic (55 times between 1348 and 1517 alone), which also encountered a population weakened by droughts and famine , never return its population size from before. The subsequent plague epidemics particularly affected children, foreigners and newly acquired Mamluk slaves who were not yet resistant to the bacterium. Again and again this thinned the ranks of the Mamluks and made discipline in the barracks wane. In the cities the death of many craftsmen caused the prices of handicrafts to rise, in the country where there were numerous fellahs that less food could be produced for the urban centers, which, however, was caused by the high mortality rate there. T. was balanced again. Above all, the decline in population also resulted in a decline in tax revenue for the Sultan's treasury. In addition, the ratio of the number of settled farmers in the countryside decreased in favor of the Bedouins , who subsequently instigated rebellions again and again.

Power struggles broke out in Syria: the Vice-Regent of Tripoli arrested and murdered Arghun-Shah, the Vice-Regent of Damascus , allegedly with the approval of an-Nasir Hasan. However, the young sultan ultimately denied having anything to do with the events, and the killer was apparently executed. Nevertheless, the vizier Manchak confiscated the property of Arghun Shah. In Egypt itself, the Circassian Mamluks tried a coup d'état in an-Nasir's first year (1347) in order to regain the privileged position they had held under Sultan al-Muzaffar Hajji I. The leading Turkish emirs nipped this attempt in the bud, but in other respects the junta of nine emirs was not so united. Taz an-Nasiri led the majority faction, but the state administration was largely in the hands of Manchak al-Yusufi and Baybugha al-Arus, who was very popular in Cairo because of his righteous administration. Baybugha left the unpleasant work to his blood brother and ally Manchak, who was an expert in financial policy (as well as torture). He cut the wages and meat rations of the royal Mamluks, dismissed whole hordes of courtly entertainers and servants, and reorganized the Dīwāne . Sultan an-Nasir then allied himself with the royal stable master ( amīr aḫūr ) Mughultay. Together they tried to widen the gap between Taz an-Nasiri and Baybugha in order to take advantage of it themselves. But in 1351 Taz took advantage of Baybugha's absence during his pilgrimage to Mecca for a coup d'état against him and Manchak. Baybugha was arrested in Cairo on his pilgrimage to Manchak. A little later, Taz's ally Sarghitmisch moved to the citadel and forced the sultan to abdicate. An-Nasir Hasan was imprisoned in the harem for the next four years , where he mainly devoted himself to studying. In his place in August 1351, as-Salih Salih , another son of Sultan an-Nasir Muhammad I, was put on the throne.

After the putsch against Taz an-Nasiri staged by Emir Sarghitmisch and the subsequent dismissal of his half-brother Salih in October 1354, an-Nasir al-Hasan was again elevated to sultan. The real beneficiary of this coup was Sarghitmisch's ally, Emir Shaychun, who de facto ruled the empire in the early years of Hasan's second sultanate as army chief with the title Atabak al-Asakir . Both emirs interfered repeatedly in religious matters. Sarghitmisch was a follower of the Turkish ulama (religious scholars) and the madhhab (school of law) of the Hanafites , whose upper Qādī he wanted to put above that of the Shafiites , which made him very unpopular among the people. Both emirs were patrons in the field of secular science and sacred architecture. So donated Schaychun the first large mosque after the plague of 1348. The Muslim in the southern districts of Cairo, located and built on two sides of a road Doppelbau combines mausoleum , mosque and Sufi Monastery for up to 700 dervishes and was in two phases between 1349 and Built in 1357. Sarghitmisch, on the other hand, had an impressive tomb madrasa built for himself not far from it and right next to the famous Ibn Tulun mosque , which has one of the most beautiful minarets of the Mamluks period. It soon became apparent, however, that the two leading emirs did not like each other very much. Shaychun was murdered in 1357 in front of al-Hasan. Although one of the sultan's mamluks confessed to killing the emir out of private resentment and was swiftly executed, al-Hasan's assurances that he had nothing to do with the crime were questioned. Sarghitmisch rose to Atabeg instead of the eliminated rival. His success was only short-lived, however, because as early as August 1358 the sultan had him captured by his Mamluks, imprisoned and soon afterwards executed, with which al-Hasan's real rule began.

Due to the experiences of his life so far, the now 22-year-old sultan mistrusted his father's emirs, which is why he used his own Nasiri Mamluks to force the old guard out of key positions of power. But his own Mamluks were also less loyal than, above all, greedy for money. In order to create a counterbalance to the power of the emirs and to force them out of politics, al-Hasan from then on increasingly relied on the advice of the women and eunuchs of the palace as well as the awlād an-nās ("children of the people"), ie his own Sons and the sons of deceased Nasiri emirs. However, already one or two years later it became clear that Sarghitmisch's elimination had only cleared the way for the rule of the Emir Yalbugha al-Chassaki, which lasted for eight years during the two successors of al-Hasan and only with the murder of Yalbugha in Year 1366 should end.

In the last years of his reign, Sultan al-Hasan became increasingly unpopular. People respected his intellect but despised his greed. He cut wages, pensions, and income from his officers' lands, and diverted state treasury funds to his own crown property. Much of the money went into his massive construction program, especially the construction of the Sultan Hasan Mosque , which was then the largest mosque in the world. This magnificent sacral complex was built opposite the citadel, its minarets towered over the walls of the fortress. Started in 1356, it was still being built five years later when suddenly one of the minarets collapsed and hundreds of people were buried under it. This was interpreted as a bad omen for the overthrow of the ruler himself. At this time al-Hasan realized that in his preferred Emir Yalbugha al-Chassaki an overpowering opponent for power had grown up. From then on, Yalbugha was no longer allowed to approach the Sultan without first having to go through a body search. It was clear to everyone that the one-time favorite was about to be overthrown, but Yalbugha struck first: he started a riot and there was fighting outside the city. When Sultan al-Hasan realized how unpopular he was among the people and that Yalbugha had incited his Mamluks to rebellion, he tried to escape to Kerak . In March 1361 he was captured and imprisoned. How he died is not known. He is not buried in the mausoleum of the Sultan Hasan Mosque because his body has never been found.