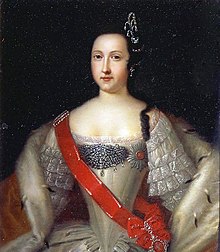 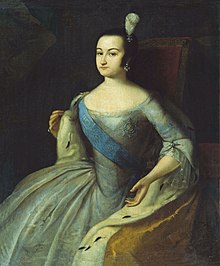 Anna Leopoldowna , actually Elisabeth Katharina Christine Duchess of Mecklenburg (-Schwerin) (*  December 18, 1718 in Rostock , † March 18, 1746 in Cholmogory an der Dwina ), was Princess of Braunschweig-Wolfenbüttel by marriage and as Grand Duchess from 1740 to 1741 Regent of the Russian Empire . As the great-granddaughter of Tsar Alexei Michailowitsch , she was an indirect successor to the Russian Tsar's throne on her mother's side.

Anna Leopoldowna was a daughter of Duke Karl Leopold of Mecklenburg and his third wife Katharina Ivanovna , sister of Tsarina Anna Ivanovna . Her mother left her husband in 1722 and returned to Russia, where Elisabeth Katharina Christine grew up. She took the name Anna Leopoldowna on the occasion of her conversion to the Russian Orthodox Church in 1732. In 1739 she was married to Prince Anton Ulrich von Braunschweig-Wolfenbüttel in Saint Petersburg . In 1740 she gave birth to a son, Ivan , who was appointed by the tsarina at the instigation of her favorite Ernst Johann von Biron to be his successor on the tsar's throne in order to enable Biron to rule over the minor.

However, after Biron - after Tsarina Anna's death - was overthrown on November 19 by Field Marshal Münnich in agreement with Anna Leopoldowna, she declared herself regent of her minor son, now under the title of Grand Duchess. She initially appointed Münnich Prime Minister, but soon fell out with him, whereupon he resigned on March 13, 1741.

The regent showed herself to be no match for her position, occupied herself little with state affairs and had a love affair with the Saxon ambassador Moritz Karl to Lynar , whom she had apparently betrothed to a relative of Münnich's. A conspiracy soon formed with the aim of securing Anna's second half-aunt (i.e. her mother's half-cousin) and the daughter of Peter the Great , Elizabeth Petrovna , to the Russian throne. The putsch was carried out on the night of December 5 to 6, 1741 - with financial support from France - by the Preobrazhensk body guard regiment and Elisabeth Petrovna ascended the Russian tsar's throne as Elizabeth I, while Anna Leopoldovna with her husband and children initially Brought to Riga , then exiled to Kholmogory on the Dvina. Here she died on March 18, 1746 after giving birth to her fifth child. Her remains are in the Church of the Annunciation of the Alexander Nevsky Monastery in Saint Petersburg. Her son, the "unfortunate tsar" Ivan VI. , was brought to Schluesselburg in 1756 and murdered there in 1764. Anton Ulrich von Braunschweig did not follow her to the grave until 1774.