Cholmogory ( Russian Холмого́ры ) is a village ( Selo ) in Arkhangelsk Oblast in the north of the European part of Russia . It is the administrative center of the Cholmogorski rajon of the same name and has 4150 inhabitants (as of October 14, 2010). Cholmogory is one of the oldest places in the region.

Cholmogory is located on the left side of the Northern Dvina about 75 km southeast of the Oblast capital Arkhangelsk near the M8 trunk road . The Northern Dvina is very branched in this section, so that near Kholmogorys there are numerous river islands , of which the larger islands are inhabited. The next largest city is Novodvinsk, about 45 northwest of Cholmogory . 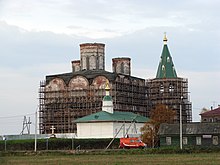 Restoration work on the destroyed Transfiguration Cathedral in Cholmogory 2010

Cholmogory was mentioned in writing as early as the 12th century. Initially known as Kolmogory , since its settlement by Novgorod merchants in the 14th century , the place has developed into an important trading center in the north of Russia, especially due to its location on the Northern Dvina, which flows into the White Sea and thus offered a convenient water connection with Western Europe was to thank. At that time it was the administrative center of the Zavoloch Region ( Заволочье ). Long before the city of Arkhangelsk was founded in the 16th century, Kholmogory, which also had its own port, became the politically and economically most important place on the Dvina. A fortress was built here, which successfully protected the city from attacks, numerous shops, inns and churches, some of which have been preserved to this day.

Only after the founding of Arkhangelsk near the Dvina estuary, Kholmogory increasingly lost its importance as a trading town. In 1784 it was given city status, which it lost again in the 20th century.

Since 2004 the place has been the administrative center of the rural community Cholmogorskoje ( Муниципальное образование "Холмогорское" ), which includes Cholmogory, Selo Lomonossowo and 52 villages (6 of them uninhabited) with a total of 5,414 inhabitants.

The following overview shows the development of the population of Cholmogory.