An anti-satellite weapon (often referred to as an ASAT weapon for short ) is designed to destroy or neutralize enemy satellites in orbit. As collateral damage , the use of such systems would generate very large amounts of space debris, which could be dangerous for other satellites in the respective orbits. 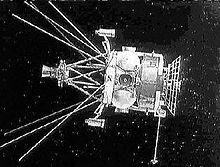 With the Near Field Infrared Experiment , a US military satellite was launched in April 2007 that can detect rocket launches worldwide. The original plan to equip it with a kill vehicle was not pursued any further.

Anti-satellite missiles (often short ASAT missiles ) are missiles that aim at satellites and then destroy them. Espionage satellites , in particular , whose elimination is of military interest, are in low orbits.

Fast and high-flying military jets are usually used as launch platforms for anti-satellite missiles, provided the missiles are not launched from the ground. In contrast to killer satellites, anti-satellite missiles do not reach orbital speeds but fly on suborbital orbits that cross the orbit of the target satellite at one point. In the collision, the target satellite and the ASAT missile are destroyed by the kinetic energy of the collision, so that a warhead in the ASAT missile is not necessary.

Ground, air or space-based laser weapons can also be used as anti-satellite weapons. 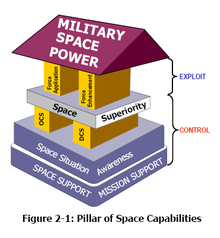 The “Pillar of Space Capabilities ” as presented in the Air Force Space Command's Strategic Master Plan FY04 and Beyond .

Space weapons also include electronic weapons such as special jammers , for example the Counter Satellite Communications System , which was officially put into operation in 2004 , with which radio traffic from communications satellites can be disrupted or blocked.

The temporary or permanent disruption of satellite communication systems by electronic means avoids their destruction and thus also the creation of further space debris , which in the worst case could be a danger for the attacker himself and his objects in space.

During the Cold War , both the US and the Soviet Union developed anti-satellite weapons from the mid-1950s. The People's Republic of China has recently developed and tested missile systems for combating objects in orbit.

The development of anti-satellite missiles on the American side was initially the responsibility of the United States Air Force , which launched the Weapon System WS-199A project in 1956 and commissioned various companies to develop such weapons.

The first American project developed by the Glenn L. Martin Company was called the Bold Orion , was based on the Sergeant rocket and was fired from B-47 bombers in a total of twelve test shots in 1958/59 . Due to the poor accuracy, the targeted Explorer 6 satellite was missed by more than 6 km, only nuclear warheads were provided as armament. A second project was called High Virgo and was developed by Lockheed . It was also based on the Sergeant missile and was launched from the B-58 Hustler . However, development of this missile was discontinued in favor of the AGM-48 Skybolt . None of the developments mentioned went into series production.

Around 1960, various nuclear weapons tests in the upper atmosphere had shown the existence of the so-called electromagnetic pulse and its effect on electronic devices. This also suggested trying to exploit this effect for anti-satellite weapons. Accordingly, various long-range and high-altitude research missiles were equipped with nuclear warheads for test purposes as part of program 437 . In 1962, in the nuclear test series Operation Dominic , especially in the individual tests Starfish Prime , Checkmate and Bluegill Triple Prime , weapons with a TNT equivalent of up to 1.4 MT were tested at altitudes between 49 and 450 km, with Starfish Prime In addition to power grids 1500 km away from the explosion site, it also disrupted communications satellites such as Telstar or completely destroyed their electronics. In the following years, rockets based on the Nike-Zeus rocket were tested on Kwajalein . 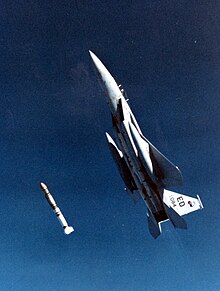 In addition to testing missiles with nuclear or conventional warheads, from 1968 the Lawrence Livermore National Laboratory for defense against satellites also developed concepts that included various types of energy weapons . In particular, laser weapons were considered, which should be brought into orbit on board so-called killer satellites. However, related research on an X-ray laser was discontinued in 1977.

After a few years of less effort, after Soviet developments became known from 1982 onwards, research in the area of ​​anti-satellite weapons was intensified again. As a direct response, the Vought ASM-135 ASAT was developed based on the AGM-69 SRAM . This missile could be fired from an F-15 fighter plane. A single, albeit successful, test took place on September 13, 1985 and destroyed the discarded X-ray space telescope P78-1 . The American ASAT project was discontinued in 1988.

As part of the Strategic Defense Initiative , the focus shifted from defense against satellites to defense against ballistic missiles. Accordingly, there was also a technical overlap between the projects.

The latest development is the Standard Missile 3 (SM-3), which is actually designed as a defense weapon against ICBMs, but has also been successfully tested against satellites. So was z. On February 21, 2008, for example, the runaway spy satellite USA 193 was destroyed at an altitude of 150 miles. The SM-3 is only fired from ships.

Developments in the Soviet Union

According to Sergei Korolev , the first concepts for anti-satellite missiles were developed between 1956 and 1959, but did not receive official approval until 1960 by Nikita Khrushchev . Thus, from 1961 under the direction of Vladimir Tschelomei as part of the Istrebitel Sputnikow (IS, German: "Sputnik / Satellite Jäger") project, the UR-200 rocket ( NATO code name : SS-10 Scrag) was also designed with a view to the Use developed against satellites. In contrast to the American projects, which provided for the launching of a rocket from the earth's surface or aircraft, the killer satellites of the IS project were to be brought into a common orbit with the specified target and then approached so far that the target was within range of the fragmentation warhead was. Tests of the system were carried out with the R-7 rocket in 1962 and 1964 .

After the UR-200 had been discontinued in favor of the R-36 , the IS project switched to the Zyklon launcher variant . A total of 23 tests were carried out with this missile until the system was declared operational in February 1973. In response to an expected military variant of the space shuttle program, the IS system was expanded and further developed from 1976 onwards. However, under Yuri Andropov , further expansion was stopped in 1983.

In addition to lasers to interfere with optical sensors (see Terra-3 ), the Almas space stations armed with an NR-23 cannon and, similar to the American ASAT program, missiles to be fired by the MiG-31 were tested as further anti-satellite weapons .

The People's Republic of China carried out a missile test on January 11, 2007, in which the decommissioned Fengyun-1C weather satellite was hit by a modified medium-range missile of the type Dongfeng 21 (NATO: CSS-5). The satellite was destroyed by the kinetic energy of an impact weapon. The weapon system was designated as the SC-19 , and the test caused a great stir internationally.

The test created a large cloud of debris that forces the International Space Station (ISS) to perform evasive maneuvers every year.

On March 27, 2019, India became the fourth country to test its own anti-satellite missile. It was the PDV Mk II , an approximately 18-ton, three-stage interceptor missile with solid fuel boosters . The Microsat-R satellite, launched two months earlier, was hit and destroyed by the third stage rocket. Observers rated the test as part of the ongoing parliamentary election campaign on the one hand, and as a signal to Pakistan and China on the other .

France announced in July 2019 that it would develop its own space-based laser anti-satellite weapons. These should serve to defend own satellites against possible attacks.