As missile defense is military technology referred to the recognition and the defense against enemy missiles used. Landing missiles are mostly detected with radar systems; Interceptors, decoys or lasers serve as defense.

During the Cold War, ABM systems existed in both the Soviet Union and the United States. These were designed to protect the capitals and the missile silos.

The Nike X system consisted of two missiles, radar systems and the associated control systems. The original Nike Zeus missile (later Spartan called) was modified for longer ranges and with a larger 5- megaton - neutron warhead fitted to enemy warheads outside the atmosphere to destroy. A second high-speed, short-range missile called the Sprint was designed to destroy nuclear warheads that had escaped the Spartan missile. The Sprint rocket accelerated very quickly (13,000 km / h in 4 seconds with 100  g ) and was equipped with a smaller one to three kt strong neutron warhead W66 to destroy the target in the atmosphere.

The new Spartan missile changed the deployment plans. Originally, scattered Nike systems were supposed to protect American cities as a “last-ditch defense”, but the Spartan missile made it possible to destroy targets hundreds of kilometers away. So the concept was turned into a "shield" for the entire United States, called the Sentinel . When the costs exploded, the program was scaled down, from now on the protection of the launch silos for ICBMs was the focus. This system, known as Safeguard , was intended to fend off Soviet nuclear attacks on the launch silos in order to guarantee the United States the possibility of a counterstrike as part of the mutual assured destruction strategy.

In the 1980s, Ronald Reagan's Strategic Defense Initiative (SDI) made headlines for the development of partially satellite-based missile defense systems. The program, which had been interrupted since the 1990s, i.e. since the end of the Cold War , was continued by the US government under a new name as National Missile Defense (NMD).

This has been sharply criticized by China and Russia , among others . They warned of a new arms race in space in 2001. In 2009, US President Barack Obama announced that he did not want to station any systems for this in Poland or the Czech Republic.

The development of energy weapons started in the SDI program is no longer pursued with moderate success, such as THEL , after high development expenditures . Operational missile defense is now based on interceptor missiles and systems for dazzling the seeker head of the approaching guided missiles (e.g. the MCD of the M6 linebacker ).

The NATO plans to install a reduced defense system for Europe since the first decade of the 21st century. Facilities used are next to Turkey u. a. in Ramstein , Deveselu , Stolp (Slupsk) and Rota . In response, Russia is planning its own system in the Kaliningrad Oblast, including a. in Jesau (Juschny) . 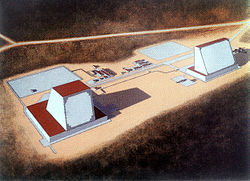 From 1963, the Soviet Union protected the capital Moscow as the political and economic center of Russia with the A-35 system ( DIA code : ABM-1 NATO code name : SAM-1 ). It was able to destroy targets outside of the atmosphere, a "last ditch" component like the sprint missile in the American Safeguard system was not present. The system used the SH-01 Galosh missile type with a nuclear warhead and was built in four locations around Moscow. Originally, as with the US Sentinel program, several cities were to be protected, but this was forbidden with the ABM Treaty in 1972.

From 1965 the mobile ABM-System S-225 ABM-System (DIA-Code ABM-3 - NATO-Codename SAM-3 ) was put into service in the Murmansk area in order to fly over the North Pole with the short-range missile SH-08 "Gazelle" Intercept US ICBMs.

At the beginning of the 1970s work was carried out on a successor system to the A-35 and in 1978 the A-135-ABM system (DIA code: ABM-4 - NATO code name SAM-4 ) was used. The SH-11 Gorgon missile was designed to destroy targets outside the atmosphere.

Various technical, economic and political reasons led to the ABM Treaty of 1972, which restricted the deployment of strategic ABM systems, but not of tactical ones such as the MIM-104 Patriot or S-400 Triumf . Under the ABM Treaty and its 1974 revision, any country was allowed to have an ABM system with 100 missile interceptors to protect a single target. The Soviet Union and later Russia used it to protect Moscow, while the US used it to protect its ICBMs at Grand Forks Air Force Base in North Dakota . The system was shut down prematurely.

The contract was terminated by the United States of America on June 13, 2002, the termination took effect after the prescribed period of 6 months in order to build up the "defense against a limited number of ballistic missiles" established by Bill Clinton , which was before was still forbidden by the same treaty.

The ABM Treaty was only signed between the USA and Russia; other nuclear powers such as India or the People's Republic of China are not affected. 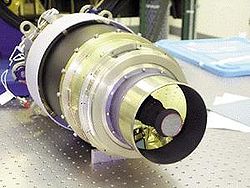 After withdrawing from the ABM treaty, the US is starting to expand its ABM capabilities nationwide. This is to be realized by ship-based ( SM-3 ), mobile land-based ( THAAD / Patriot ) and land-based ( GBI ) missiles with kinetic warheads. In all cases, the approaching ballistic missiles are destroyed in space. The mobile MEADS system serves as a “last-ditch” system to destroy missiles that break through in an emergency in the atmosphere. Other methods such as space-based defense ( NFIRE ) or the interception of the rocket in the launch phase ( Boeing AL-1 ) are still in the test phase.

The IAAPS (Integrated Army Active Protection System) is currently under development. This is intended to protect the Stryker armored vehicle from approaching guided missiles and projectiles of all kinds by destroying them from their impact.

The Russian A-135-ABM system to protect Moscow and its agglomeration is still in use. In the meantime, the missile's nuclear warheads are said to have been exchanged for conventional ones. Since the system was installed in the 1980s, it probably corresponds to the state of the art in those years. Nothing was known to the public about modernizations or other details. Originally, the system used two types of guided missiles: the exo-atmospheric interceptor missiles 51T6 (NATO: Gorgon) and the endo-atmospheric interceptor missiles 53T6 (NATO: Gazelle). The 51T6 long-range guided missiles were retired in 2003.

The S-300P and S-400 systems are used on the tactical level . The S-300W system is available for mechanized formations . These systems can be used to combat short- and medium-range ballistic missiles. 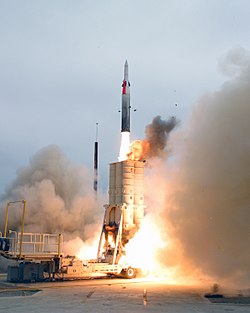 With financial support from the United States, the Israelis developed the Arrow missile defense system. Its mobility makes it comparable to the PATRIOT system, but it can only attack ballistic missiles. It has a conventional warhead. After long-range radars (Green Pine) have located the approaching ballistic missile, a 2-stage Arrow missile is fired at the target. The rocket destroys the attacking rocket at an altitude of around 50 km, i.e. within the atmosphere.

India is actively working to expand its ABM capabilities. For example, Israeli Green Pine radar systems were acquired for this purpose. The Indian ABM system includes two missiles. An interception system to destroy targets outside the atmosphere ( English exoatmospheric interceptor system , Prithvi Air Defense (PAD)), and another system that destroys targets within the earth's atmosphere ( English endo atmospheric missile system , Advanced Air Defense (AAD)). The PAD is a two-stage interceptor missile, with liquid and solid propellant stages . The range of the rocket (not the maximum altitude) is 80 km, the range of the positioning radar is 600 km. The AAD have a range of 25 km and are guided to the target by a phased array radar .

The high to very high speed and the mostly small size of the approaching missiles make the integrated detection systems and weapon control systems for a successful defense highly complex and expensive.

Anti-ballistic missile systems (ABM systems) serve to protect an entire area (space protection) from ballistic missiles . They have special anti-aircraft missiles that are supposed to destroy approaching military missiles or cruise missiles . They were first built up by the Soviet Union and the USA as a strategic defense against nuclear ICBMs during the Cold War and were limited by the ABM Treaty. A number of other countries now have tactical missile defense systems.

The systems are usually equipped with solid propulsion and reach maximum speeds of between Mach 2 and Mach 10. High- performance radar devices and, if necessary, thermal and optical sensors for detecting the attacking missile are essential for defense against ballistic missiles . The destruction takes place either by kinetic effect ( hit-to-kill ) or by detonation effect .

Passive systems are self-protection systems, such as the continuous ejection of decoys by aircraft during landing approaches at airports in areas where attacks with MANPADS are feared. In addition, there are high-energy lasers that can blind the seeker head of an infrared-controlled missile.

In the United States, there were plans to install systems for glaring the seeker head in current commercial aircraft, as attacks by portable anti-aircraft missiles ( MANPADS , such as Stinger ) are expected in some regions of the world . According to studies, there have been around 35 attacks of this type on aircraft (7 on large passenger planes) in the last 25 years, with 24 planes being shot down and over 500 people dead. The last downing was a Boeing 737-800 of Ukraine International Airlines over Tehran (see Ukraine International Airlines flight 752 ). These plans were therefore abandoned in the USA because of the questionable efficiency and high costs. In 2007 the Northrop Grumman Guardian was introduced. Another system is the BAe Systems Jeteye , which American Airlines has been using on three Boeing 767s since 2008.

At the Israeli airline El Al, on the other hand, every machine is equipped with infrared missile defense systems of the Flight Guard type (developed by Israel Aerospace Industries ) in order to be able to detect heat-seeking guided weapons using radar and deflect them with decoys . Although different missile defense systems now exist, no other airline uses this technology. The system has been criticized and banned by some European countries, especially Switzerland, because shooting down the decoys could lead to a fire on the ground.