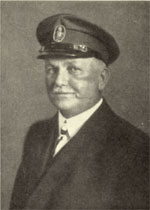 August Jacob Georg Howaldt (born July 23, 1870 in Kiel -Gaarden; † May 10, 1937 in Hamburg ) was a German shipbuilder and entrepreneur from the Howaldt family in northern Germany .

Georg Howaldt was born as the son of the shipyard founder Georg Howaldt and learned shipbuilding and mechanical engineering at the Howaldtswerke in Kiel after attending the Kiel School of Academics , then studied engineering at the Technical University of Karlsruhe , the Friedericiana , where he was a member of the Corps Frisia , of today's Corps Friso-Cheruskia Karlsruhe . After serving as a one-year volunteer (1892–93), he continued his studies at the Technical University of Charlottenburg .

In 1894 he became a production engineer, later an authorized signatory and was a member of the board of Howaldtswerke AG (today: HDW ) until 1910 . From 1900 to 1910 he was the Austro-Hungarian Consul in Kiel. He belonged to the district council of Bordesholm and in 1910 became a member of the Schleswig-Holstein provincial council . From 1912 he was managing director of the German Shipyards Association in Hamburg. He participated in the First World War as a soldier from 1914 to 1916.

He married Clara Schwindt, daughter of the factory owner Louis Schwindt and his wife Amalie Gerbracht, on March 5, 1895 in Karlsruhe . The marriage had five children.