The B61 is a hydrogen bomb that was constructed as a free-falling aerial bomb with a selectable explosive power . She entered service in 1968 and is still in the United States' nuclear arsenal .

The B61 was created in response to a request from the United States Armed Forces in 1960. They needed a light nuclear free-fall bomb that could be deployed at high speed by low-level tactical fighter aircraft . Development under the designation TX-61 began in 1963 at Los Alamos National Laboratory in New Mexico . After problems in production, the first models were shipped to the United States Armed Forces in 1968.

A B61 in various stages of assembly

The B61 is streamlined so that it can be mounted on the outside of supersonic combat aircraft. It is equipped with the standard 356 and 762 mm bomb locks. The ignition mechanism is installed in the ogival bomb tip . Depending on the model, this includes a proximity fuse , impact fuse or time fuse . The bomb body has a length of 3.5 to 3.6 m and the weight is between 320 and 540 kg (depending on the construction). The actual nuclear warhead takes a length between 70 and 100 cm. The trunk diameter is 330 mm. With the exception of the B61-11 and B61-12 versions, the B61 has a parachute / braking parachute made of nylon / Kevlar with a diameter of 5.0 or 7.30 m in the rear of the bomb . This opens after the bomb has been dropped in order to slow it down to such an extent that the carrier aircraft has enough time to move away from the area of ​​impact of the nuclear weapon explosion. With the help of the parachute triggered by a gas generator , the bomb can be decelerated from high speed (tested up to Mach 1.2) to around 56 km / h within 2 seconds  . This means that a drop from a low flight from a minimum height of 15 m is possible (lay down) . After the release, the B61 can be ignited with a delay of 31 or 61 seconds. If the B61 is dropped from a great height, it can also be ignited in the air. 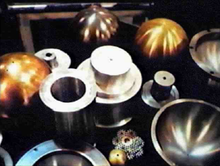 B61 bomb: the individual parts of the nuclear warhead

The nuclear warhead of the B61 is a hydrogen bomb based on the Teller-Ulam design . A boosted fission bomb is used in the primary nuclear fission explosive device (fission fuse) . This consists of a plutonium sphere filled with deuterium - tritium gas with a neutron reflector made of beryllium . For the detonation of this primary nuclear fission explosive device , explosive lenses with the polymer-bound explosive PBX-9504 and in the later versions PBX-9502 are used. In the secondary fusion explosive device, lithium deuteride (with 6 Li) is used in a coat of highly enriched uranium . The nuclear warhead is constructed in such a way that the explosive force can be selected in four stages, between an equivalent of less than one kiloton of TNT up to a maximum explosive force of 400 kT TNT (B61-11). With the first models, the selection of the explosive power had to be done on the ground before the aircraft took off. In the later versions, the explosive force can also be adjusted shortly before the launch from the carrier aircraft.

The nuclear warhead of the B61 is equipped with the Permissive Action Link (PAL) to prevent accidental detonation or improper ignition . A Command Disablement System (CDS) is added to the later versions.

A total of 3155 B61 were developed for both the tactical and the strategic operational concept. The B61 was the most widely used nuclear weapon in the United States for decades. It was stationed in large numbers around the world from 1968. The versions B61-3, B61-4 and B61-5 are also stationed in Europe as part of NATO's nuclear participation . At the end of 2017, around 150 B61s were still in storage in the United Kingdom , Belgium , Germany , the Netherlands and Turkey . Presumably twenty B61s are still stored in Germany today in the Tactical Air Force Wing 33 of the Bundeswehr at the Büchel Air Base in underground bunkers . Until 2005, another 308 B61s were stored at the US Air Force Base Ramstein and the German Air Force Air Base Nörvenich , Büchel and Memmingerberg (until 2002).

The United States Armed Forces aim to keep the B61 operational until at least 2025. The B61-12 Life Extension Program project was set up for this purpose . This project provides for the development of a new B61-12 . The existing nuclear warheads of the models B61-3, B61-4 , and B61-10 are to be reused. The 480 planned B61-12 are to replace all nuclear free-fall bombs (including the B83 ) in the US nuclear arsenal. The program costs amount to about 10 billion US dollars .

A total of nine versions of the B61 were produced, which differ in their functionality, but are almost identical on the outside.

The B61-1 could be used both as a tactical and strategic nuclear weapon. It had selectable explosive power from 10 to 340 kT. The B61-1 was equipped with a Type B Permissive Action Link . 700 pieces were produced. After this type of bomb was discarded in 1995, some of the nuclear warheads continued to be used on the B61-7 .

The B61-2 was a tactical nuclear weapon for use with United States Navy aircraft . The B61-2 had a selectable explosive force of 10 to 150 kT. A total of 235 pieces were produced which were withdrawn by 1996. The B61-2 was equipped with a Type C Permissive Action Link .

The B61-3 is a tactical nuclear weapon with a selectable explosive force of 0.3 / 1.5 / 60/170 kT. For the first time, the B61-3 uses insensitive explosives and an Aircraft Monitoring and Control System (AMAC) . It is also the first model with a parachute / braking parachute. The B61-3 is equipped with a Type F Permissive Action Link . A total of 545 units were produced, of which around 200 are still in the nuclear arsenal. Around 50 of these are stored in Europe.

The B61-5 was a tactical nuclear weapon with a selectable explosive force of 10 to 150 kT. It was the first B61 to be equipped with the flexible Enhanced Nuclear Detonation System (ENDS) ignition system. A type D Permissive Action Link was also used. A total of 235 pieces were produced which were withdrawn by 1997.

This version only existed as a project. The plan was to continue using the nuclear warheads from the B61-0 . The project was canceled.

The B61-7 is a B61-1 retrofitted with the Permissive Action Link Type D , AMAC , ENDS and insensitive explosives. It can be used as both a tactical and a strategic nuclear weapon. It has a selectable explosive force of 10/170/340 kT. There are currently around 430 bombs of this type in the nuclear arsenal, 215 of them active.

This version only existed as a project. The plan was to continue using the nuclear warheads from the B61-2 and B61-5 . The project was canceled.

This version only existed as a project. The plan was to continue using the nuclear warheads from the B61-0 . The project was canceled.

The B61-10 is a tactical nuclear weapon with a selectable explosive force of 0.3 / 5/10/80 kT. It uses the W85 nuclear warhead from the Pershing II and is equipped with a Type F Permissive Action Link . A total of 215 pieces were produced of which around 100 are still in the nuclear arsenal. All B61-10 have been in storage since 2016 and are inactive.

The B61-11 was developed in 1997 to combat underground bunkers and missile silos and replaced the B53 bomb in the US nuclear arsenal . For this purpose, a bomb shell made of high-alloy steel is used to ensure sufficient penetration performance in the ground and reinforced concrete. The B61-11 uses a modified nuclear warhead from the B61-7 . This has a selectable explosive force of 0.3 / 100/400 kT. The B61-11 should be dropped from a great height and penetrate 7-10 m into the ground and be ignited there. Such an underground explosion generates massive earthquake waves with pronounced crater formation , which can destroy underground structures in a wide area. This type of explosion also generates up to several million tons of radioactive fallout. The general public is calling the B61-11 a conventional bunker-breaking bomb , such as B. the BLU-109 perceived. However, since the B61-11 cannot contain the explosion below the surface of the earth, the operational concept of the B61-11 is often misunderstood.

The B61-12 is equipped with the JDAM steering system with satellite navigation and in this sense is a precision-guided bomb . This makes it much more accurate than its predecessor models and should have a significantly increased probability of destruction. According to the National Nuclear Security Administration (NNSA), the B61-12 , like the B61-11 , should penetrate several meters into the ground and thus be able to be used against deep-lying bunkers despite its lower explosive power. The B61-12 uses existing components from the B61-3, B61-4 , and B61-10 and is intended to gradually replace all nuclear free-fall bombs in the US nuclear arsenal. The production of 400–500 B61-12 is planned for this. The B61-12 should have a selectable explosive force of 0.3 / 1.5 / 10/50 kT. In addition to the nuclear-armed carrier aircraft of the United States Air Force and the NATO allies, the F-22 Raptor and F-35 Lightning II combat aircraft are now being added as operational platforms.

A large number of strategic and tactical bombers and combat aircraft can be equipped with the B61 . These currently include:

as well as the one introduced in several European countries