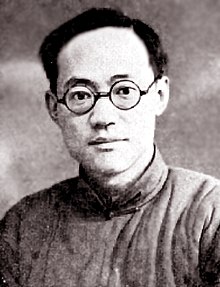 Ba Jin is one of the most important and most widely read Chinese authors of the 20th century . He mainly wrote novels. His real name was Li Yaotang ( 李堯 棠  /  李尧 棠 , Lǐ Yáotáng ) or Li Feigan ( 李 芾 甘 , also Liu Fangan). Ba Jin chose his pseudonym from the composition of the name of the Russian anarchist Bakunin ( 巴枯宁 ) and Kropotkin ( 克鲁泡特金 ) that he, like Emma Goldman revered. He comes from a rich and powerful scholar family and after attending a foreign language school he worked as a translator for Russian and other foreign-language poets. At times he studied in Shanghai and from 1926 in France . His literary work began in the 1920s. He also worked as an editor of literary periodicals and publications, and translated foreign literature into Chinese with the help of Esperanto translations.

During the Sino-Japanese War , he was involved in anti-Japanese propaganda with Mao Dun and Liu Baiyu . After 1949 he was a member of the People's Congress. He was considered a counterrevolutionary during the Cultural Revolution and then rehabilitated in 1977.

Ba Jin was an advocate of the planned language Esperanto.

His literary work was influenced by the French and Russian novels, especially Chekhov , Turgenev and Émile Zola . His novels express strong emotions, while by his own admission he never bothered about the technical side of his writing. His early works are characterized by strong subjectivity and romanticism , while a critical-realistic streak appears in his later works .

The official Xinhua news agency recognized Ba Jin as "one of the greatest cultural masters of modern China".

The asteroid (8315) Bajin , discovered by Chinese scientists, was named after Ba Jin in 1999. In 1985 he was elected as an honorary foreign member of the American Academy of Arts and Letters .