Maria Barbara Brecht-Schall , artist name Barbara Berg (born October 28, 1930 in Berlin ; † August 31, 2015 there ), was a German theater actress and costume designer. She was Bertolt Brecht's main heiress and administrator of Brecht-Erben GmbH, which also represented the interests of the other Brecht children, Hanne Hiob and Stefan Brecht , who also died .

The daughter of Bertolt Brecht and Helene Weigel had been married to the actor Ekkehard Schall since 1961 . The marriage was the birth of actress and director Johanna Schall and costume designer Jenny Schall.

The actress had been a member of the Berliner Ensemble's cast of actors since the 1950s. Until 1972 she played there under the name Barbara Berg .

She was the owner of all rights to the Brecht plays. Her restrictive practice of awarding performance rights has been criticized several times, and she also attached particular importance to reproductions that she rated as true to the original. After Heiner Müller's death , she acquired his shares in the Berliner Ensemble.

Barbara Brecht-Schall lived in the Brechts garden house on Schermützelsee in Buckow together with her husband until his death . Brecht and Weigel's adjoining house was sold to the GDR in 1975, which established a museum there in 1977.

In 1987 Barbara Brecht-Schall was awarded the Patriotic Order of Merit in gold. 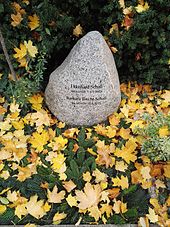 Barbara Brecht-Schall died at the age of 84. She was buried in the Dorotheenstadt cemetery in her hometown in the Mitte district .

Ekkehard Schall , Barbara Brecht-Schall, Hans-Joachim Hoffmann , Ruth Berghaus and Norbert Christian at a reception during the GDR's Brecht Week in 1973 (from left to right)