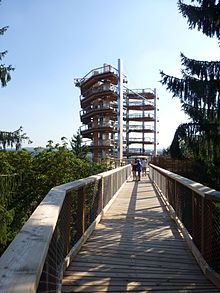 The Treetop Walk Saarschleife is a 1,250 meter long treetop walk in Orscholz , a district of the Mettlach community . Located above the Cloef , you can watch the Saar loop from here . The tourist attraction is operated by the Erlebnis Akademie AG company .

The 1,250 meter long treetop path leads from the Cloef atrium to a viewing tower that was built above the Cloef viewing point. The path is at a height of up to 23 meters and has a minimum width of 2.5 meters. Four didactic stations are incorporated into the path. These provide information about quartzite , the beech forest , the Saar loop and dead wood . A Rialto bridge and a slide have been incorporated for children . A special attraction is the 42 meter high observation tower with a 70 square meter platform. The way up is via serpentines with rest areas. The path is completely barrier-free and only has a maximum gradient of 6%.

The path is open all year round (except December 24th), only the opening times are adapted to the seasons. In bad weather (thunderstorms, hail, storms or ice) the path is closed for safety reasons.

The treetop path was set up by the Erlebnis Akademie AG from Bad Kötzting in Bavaria on the initiative of the Mettlach community . The costs amounted to 4.7 million euros, to which the Saarland contributed 275,000 euros. The cooperation partner is the European Regional Development Fund . In addition, the treetop is a sponsoring member of EUROPARC Germany and has been awarded the title National Natural Landscapes . With 80 percent wood is the defining building material. 1,000 cubic meters of Douglas fir and larch wood and 100 tons of steel were used for the construction.

The implementation of the project was accompanied by criticism. Many said that the observation tower would spoil the landscape and nature because it extends so high above one of the landmarks of the Saarland and can also be seen from afar. The Mettlach municipal council, however, had voted in favor of the project by a large majority, as it hoped that the Saar loop would be upgraded for tourism. The Naturschutzbund Deutschland had also spoken out in favor of the project.