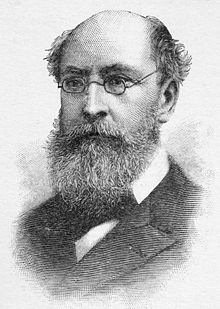 Benjamin Apthorp Gould (born September 27, 1824 in Boston , † November 26, 1896 in Cambridge , Massachusetts ) was an American astronomer who also worked in Argentina for a long time .

In 1866 he carried out the first determination of length between America and Europe using a transatlantic cable .

In 1868 he became the first director of the Argentine National Observatory (today Observatorio Astronómico de Córdoba ). In Argentina he extensively mapped the southern sky using newly developed photometric methods. The result were several star catalogs , including his Uranometria Argentina in 1879 . He stayed in Argentina until 1885, when he returned to Cambridge, Massachusetts.