The Bernward psalter is a precious liturgical manuscript in the possession of the Herzog August Bibliothek Wolfenbüttel .

It was executed in Hildesheim between 1010 and 1020 by the hand of the Regensburg calligrapher and illuminator Guntbald in a representative Carolingian minuscule in the oblique-oval style. Bishop Bernward commissioned the manuscript. This is suggested by the high material and artistic demands of the manuscript, which - despite the loss of three decorative pages - comes close to that of the three other Guntbald manuscripts (Hildesheim, Dom-Museum, DS 19, DS 33; Nürnberg, GNM, Cod. 29770). Due to addenda and modifications to the text, the Psalter has been in the possession of the Michaeliskloster Hildesheim since around 1022 .

The manuscript comprises 141 large-format parchment leaves . It is a so-called Psalterium gallicanum non feriatum, d. H. a text based on the Septuagint in which the Psalms are notated according to the order given by the Liturgy of the Hours, but rather continuously. Fourteen representative gold initials intertwined with silver tendrils subdivide the text, which thus has a combined three-dimensional and decade structure. The psalms are followed by hymns, creeds ( Credo , Athanasianum ) and other prayers. In the litany of saints numerous saints from southern Germany are listed, including v. a. the St. Emmeram . At the end of the manuscript, in the middle of the 12th century, the relic donation by Hildesheim Cathedral Canon Ricbertus to the Michaeliskloster was registered. In the 15th century, two scribes added colophon-like verses there, appropriating the psalter to Bishop Bernward. The abbot of the Michaeliskloster, Johannes Jacket, had the psalter rebound in 1615 and even gave it as an autograph as Bishop Bernwards. Thus the Bernward psalter is an important testimony to the Hildesheim saints and Bernward cult. In terms of liturgical history, it documents an important stage in the development of psalter manuscripts towards the breviary and book of hours. 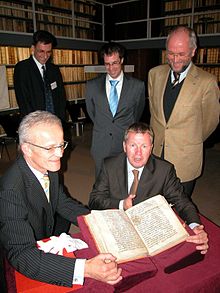 Already in the 17th / 18th According to an ex-libris that has only survived in writing, the Psalter must have been in the possession of Baron Dietrich Otto Corff called Schmising in the 19th century . This was presented from 1669 as canon of Münster , in 1674 also in Hildesheim and in 1676 was included in the chapter there. Presumably the Psalter came into the possession of the House of Landsberg-Velen through this canon , since there were close connections between the noble houses through parallel office and biographical connections. It was later kept as a deposit in the State Archives in Münster . In 2007 the Herzog August Bibliothek Wolfenbüttel acquired the Psalter for 1.5 million euros from funds from the state of Lower Saxony and various foundations.