The Diocese of Xianxian ( Latin Dioecesis Scienscienensis ) is a Roman Catholic diocese based in Xianxian in the People's Republic of China .

Xian was the seat of the Catholic Mission of the Jesuits (SJ), which later also provided all bishops.

It lost parts of its territory in favor of the establishment of the following Apostolic Prefectures :

With the Apostolic Constitution Quotidie Nos it was raised to the diocese on April 11, 1946. The Chinese government named it the Diocese of Cangzhou . In 2006 the diocese celebrated the 150th anniversary of its foundation. In 2005 it had 75,000 Catholics, 206 churches and chapels, and nearly 100 priests. 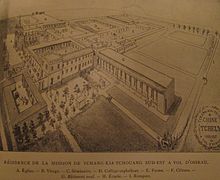