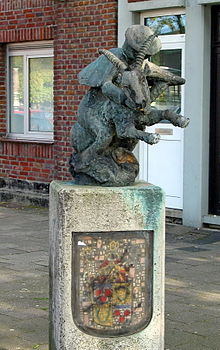 Statue of a buck rider in Schaesberg

The Bockreiter ( Bokkenrijders in Dutch and Bokkeriejersj in Limburgish ), according to tradition one were gang that from 1730 to 1780 in the area of Limburg , in Herzogenrath and Schinnen was active. At that time Limburg was an area that belonged together, whereas today it is divided into three states : Belgium , Germany and the Netherlands .

One of the leaders of the buck riders was the "Black Captain". Since the buck riders often gave their booty away to the poor, they were also called the Robin Hood Gang of the Netherlands.

Roughly speaking, there were two Bockreiter periods, one around 1740 and another around 1770. The first Bockreiter gang emerged in Wolfhagen, part of the municipality of Schinnen. The leader was called Geerling Daniels. A particularly notorious goat rider of the time was the French Jacques du Jardin, a former soldier who made his living as a minstrel (he played the violin ). His nickname was "de Keukelaer". He was hanged in 1751 on the Danikerberg (the border between Geleen and Schinnen) .

During the second buck rider period, 328 men and women in the region were executed after confessions obtained through torture. One of the gang leaders is said to have been the Herzogenrath surgeon Joseph Kirchhoff . Whether he was guilty or innocent is still debated today.

Based on the 1986 youth novel Ontsnapt aan de galg (German: "Dem Galgen escaped") by Ton van Reen, the television series De Legende van de Bokkenrijders was filmed in 1993 , which was also broadcast in Germany under the title Die Bockreiter .

The Mad House Villa Volta is located in the Dutch leisure park Efteling , which also addresses the gang's deeds.