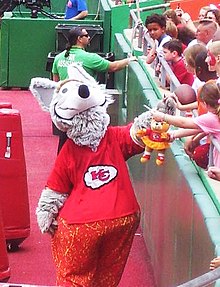 Bonnie Erickson is an American doll maker and costume designer . She designs mascots for American sports teams and worked for the Muppet Show.

The most famous dolls she has built include Miss Piggy , Sattler, Waldorf and Zoot from the Muppet Show . Erickson created Miss Piggy in 1974 for a Muppet Television special, The Muppet Show: Sex and Violence , which eventually aired as one of two Muppets pilot episodes.

Erickson also made dolls for The Fraggles and the Emmy-winning television movie The Christmas Toy . She mascots together with her husband Wayde Harrison with their company Acme Mascots (formerly: Harrison / Erickson ). One of the most famous mascots that Erickson created is Phillie Phanatic , the mascot of the Philadelphia Phillies .

Erickson grew up in Saint Paul , Minnesota . As a teenager, she moved to upstate New York to work in a theater camp. She then moved to New York City and enrolled in the Art Students League of New York . Among other things, she trained there in sculpture .

She originally made clothes and accessories for small boutiques in New York. Broadway designer Patricia Quinn Stuart discovered Erickson's designs and invited her to work for them. Erickson worked in New York in the 1960s for Broadway as well as for off-Broadway productions, both for Stuart and for his own account. She became known to insiders during this time for costumes made entirely of plastic for a performance of Dido and Aeneas . Even before working with Henson, Erickson experimented with human-sized figures made of muslin , which she dressed in historical costumes.

Erickson first worked with Jim Henson in 1970 when she was designing the costumes for the TV movie The Frog Prince . To her own surprise, working for Henson included not only making the costumes, but also building the dolls' bodies. Erickson developed from a costume designer to a doll maker at Henson. In retrospect, she particularly emphasizes the role that Don Sahlin played in her development and that shaped her approach to dolls and design.

Her early work also includes the human puppets for the television film The Muppet Musicians of Bremen . The first permanent characters she designed included two of the three puppets in the Country Trio - caricatures of Jim Henson, Frank Oz and Jerry Nelson , who performed together as a band. The characters of Henson and Oz come from Erickson. The country trio appeared as a guest in several US television programs even before the invention of the Muppet Show and had irregular appearances on the Muppet Show. For Sesame Street , she was involved in the construction of Sam the Robot , a living robot that starred in the series for several years.

For the Muppet show, in addition to the figures for Miss Piggy and Statler and Waldorf, she also built the news anchor, as well as George, the caretaker and, together with Jim Henson, the Danish cook. She drew the design for the musician Zoot, which Dave Goelz then built. At Henson, she worked with Don Sahlin , who she said became her most important influence in the design and construction of dolls. Contrary to her original plans, Erickson stayed with Henson for a few years. It wasn't until after the first year of the Muppet Show, when the main puppets were created and the characters established, that she left Henson.

Erickson went back to the United States and realized her old dream of starting her own business. Together with her husband Wayde Harrison, she opened a design studio in an old apartment in Brooklyn Heights , New York City. She remained closely connected to Henson: She was the creative director of the Children's Television Workshop - the producer of Sesame Street - for 13 years . She worked on the Fraggles and Henson television films. After his death, she became a member of the Board of Trustees of the Jim Henson Legacy Foundation. After the National Museum of American History received 20 dolls from the Henson Studios in 2013 , Erickson is helping to restore them and prepare them for permanent exhibition in the museum.

Introduced in 1978, Phillie Phanatic was the first major league baseball mascot to be completely redesigned and had no history on or with the team. If teams had mascots at all, they were mostly static and hardly moved - also because of the heavy and cumbersome design of the costumes of the time, which gave the player little freedom of movement. Philly was one of the first costumes that gave the player the ability to move quickly and expressively, including running or jumping, for example.

The Phillies made millions of dollars in sales with Phillie Phanatic in its early years. To this day he is one of the most famous and popular residents of Philadelphia and now has a place in the Baseball Hall of Fame . Phillie was so successful that almost all MLB teams now have such mascots. However, this was a stormy development. After the success of the Phillie Phanatics, Erickson was to design a mascot for the New York Yankees . Dandy was two weeks before his debut as the Yankees outfielder to Lou Piniella so much about the San Diego Chicken of the San Diego Padres upset that Yankees owner George Steinbrenner announced in baseball is no place for mascot. Dandy appeared anyway, but was hardly promoted and was not allowed to enter the field. After two years, the Yankees made Dandy disappear again without much publicity.

Team mascots that were actually used and some are still active are Youpie from the Montreal Expos , KC Wolf from the Kansas City Chiefs , Stuff from the Orlando Magic , G. Whiz from the Washington Wizards and Hugo from the Charlotte Hornets , Jaxon deVille for the Jacksonville Jaguars and Slyly for the Japanese baseball team, the Hiroshima Carp . The dolls that she also designed include the dolls that came with the first McDonald’s Happy Meals.

Erickson is the executive director of the Jim Henson Legacy , a foundation that aims to keep the spirit of his works alive after the death of Jim Henson . To this end, the foundation organizes exhibitions of Jim Henson's dolls, for example, or it donated some dolls to the Smithsonian Institute , where they are exhibited in the National Museum of American History . She also works with a small Jim Henson museum in his native Leland , Mississippi , and with the University of Maryland , which has a Jim Henson statue.