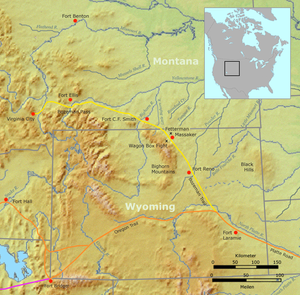 The Bozeman Trail was an overland route that connected the Oregon Trail to the gold fields of western Montana in the United States . It was mainly used by gold prospectors and settlers between 1863 and 1868.

Before that time, there were two time consuming ways to reach the gold mines. The first itinerary was up the Missouri to Fort Benton and then on horseback to Virginia City . It was expensive and time consuming. The second route was on the Oregon Trail to Fort Hall, Idaho and then north. This route was also very long and there was a lack of water holes.

However, there was a route used by the Indians across the Powder River area , which had been used since prehistoric times and which was also known to explorers, trappers and traders of the early nineteenth century. This route was shorter, more convenient and, above all, offered a better supply of drinking water. Captain William Raynolds of the US Army's Corps of Topographic Engineers undertook an expedition from 1859 to 1860 to map this area for the government, and named numerous scenic features along the route that would serve as signposts for many travelers over the next few years. It was thanks to John Bozeman and John Jacobs to make the route passable and known for vehicles.

The route turned north of Fort Laramie , Wyoming, from the Oregon Trail to the northwest, crossing the North Platte River and the upper reaches of the Powder River. Then the trail crossed Lodge Pole Creek near what is now Buffalo in Wyoming, headed east along the Bighorn Mountains to Montana and crossed the Little Bighorn and Bighorn Rivers . At today's Billings the Yellowstone River was reached, in the valley of which it went further west until the trail finally crossed the Absaroka Range over the Bozeman Pass and led into the valley of the Gallatin River and to the gold fields. The total length of the trail was about 800 km and it took a wagon train about 4 weeks.

Like other of these overland routes, the Bozeman Trail also consisted of many tracks that covered a wide route. The settlers' wagons often used a different route than the later military columns. Many travelers also often deviated from the well-trodden lane when it was softened by the rain, or in search of food or water. The Bozeman Trail was thus a system of several trails that only joined at certain points and then ran separately over many kilometers.

The Bozeman Trail led through the middle of the land contractually guaranteed to the Lakota . The Indians defended themselves by raiding gold prospectors and settlers passing through. Because the Indian attacks were rampant, and although Jim Bridger had marked the Bridger Trail, a shorter and easier route west of the Bighorn Mountains that did not pass through the Lakota area, the army built a chain of forts along the Bozeman in 1865 after the end of the Civil War Trails such as forts Reno, Phil Kearny , CF Smith, and Ellis. In the Red Clouds War (1866–1868), named after the Oglala chief Red Cloud (Red Cloud), allies Lakota, Northern Cheyenne and Arapaho primarily attacked these forts. The climax of the conflict was the Fetterman Skirmish , when 81 soldiers under Captain William J. Fetterman were killed by Oglala warriors under Crazy Horse . After two years of bitter, bloody fighting, the Americans withdrew in resignation and Congress in Washington formed a peace commission. The transcontinental railroad was nearing completion and the Bozeman Trail lost its importance. In 1868 the US government offered Red Cloud the second contract of Fort Laramie , which guaranteed the Indians the area around the Powder River including the Black Hills . The forts were abandoned in 1868, later burned down and the Bozeman Trail closed. Red Cloud remained the only Native American leader in the west to win a war against the US Army.

Today an interstate highway runs along the old route , with numerous signs on the side of the road pointing to historical sites on the former Bozeman Trail.