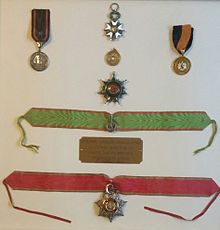 Charles RW Chaillé-Long Bey ( Charles RW Long (maiden name)) (born July 2, 1842 in Princess Anne, Maryland ; died March 24, 1917 in Virginia Beach ) was an American officer in the Egyptian service and explorer. He gained fame through his exploration of the upper Nile basin, through which he expanded his knowledge of the sources of the Nile .

Chaillé-Long was a descendant of Pierre Chaillé, a Huguenot who immigrated to the United States (USA) at the end of the 17th century . When the American Civil War began, he dropped out of Washington Academy in Maryland and joined the Northern States . From 1866 to 1869 he worked in New York for a trading company and also worked as a journalist. In vain he tried to get an engagement with the French Army and instead joined the Egyptian Army in March 1870 and became a staff officer with the rank of lieutenant colonel . In the same year he had his name changed by adding the patronymic Chaillé . First, the General Staff in Cairo, he was involved the governor of the province in 1874 Equatoria appointed Charles Gordon assigned as Chief of Staff, who dispatched him in the same year to Uganda scout with the order, the region and I. Mutesa build, King of Buganda, diplomatic relations. He explored a still unknown region around Lake Victoria and discovered Lake Kyoga , which he named after Ibrahim Pascha Ibrahim Lake . For his Uganda mission, Chaillé-Long was awarded the Mecidiye Order by the Egyptian ruler, Ismail Pasha , and promoted to colonel , which gave him the title of Bey . In recognition of his research to expand knowledge of the sources of the Nile, he was awarded the Charles P. Daly Order by the American Geographical Society in 1910 . After a short stay in Khartoum , where he recovered from the rigors of his expedition, he was commissioned in 1875 to take action against the Nayangbara , who blocked the ivory trade with the Azande . He defeated the Nayangbara and placed the country under Egyptian sovereignty. Then he returned to Cairo. In 1877 he quit his service and returned to New York in the USA, where he was bureau chief at the police court and also studied law at Columbia University . He completed his studies in 1880. In 1881 he worked in Alexandria at the international courts of law. In 1882 Chaillé-Long became the managing consul in Alexandria and thus witnessed the massacre of June 11, 1882 and the British bombing the following month (→ Urabi uprising ). In October 1882 he left Alexandria and lived in Paris. From 1887 to 1889 he was Consul General in Korea and led a scientific expedition to Jeju-do during this time .