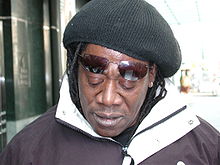 Clarence Clemons (born January 11, 1942 in Norfolk , Virginia , † June 18, 2011 in Palm Beach , Florida ) was an American saxophonist . He played in Bruce Springsteen's E Street Band , as a member of which he was posthumously inducted into the Rock and Roll Hall of Fame in 2014.

Clarence Clemons' father owned a fish shop and his grandfather was a Baptist minister. When he was nine he got a saxophone; King Curtis had an early influence on his playing , especially his saxophone part in The Coasters hit Yakety Yak from 1958. He studied at Maryland State College with an emphasis on sports and music; however, a knee injury ended his football career. He began his musical career in Newark in the late 1960s.

His saxophone playing then became a major part of the group sound of Bruce Springsteen's E Street Band. He himself named Junior Walker , King Curtis and Gato Barbieri as influences . His saxophone pieces have always shaped the sound of the E Street Band and thus Springsteens. Clemons, often called "Big Man" because of his stature, was the head of the band alongside Steven Van Zandt and, unlike Van Zandt, had been on board since Greetings from Asbury Park, NJ (Springsteen's first album). At the concerts of the "Bosses" Clemons enjoyed special esteem, which was particularly evident when Springsteen introduced his band. He was also immortalized in the Born to Run classic Tenth Avenue Freeze Out :

As a soloist and singer, Clarence attracted quite a bit of attention on his own in 1983 and reached charts with a punk cover version of the Resurrection Shuffle composed by Ashton, Gardner & Dyke . Clemons also had a Top 20 hit in 1985 with You're a Friend of Mine in a duet with Jackson Browne . In 1990 he can be heard on the album Freeze by the Dutch rock musician Herman Brood . He took part in 1991 on the album Liebe by German rocker Peter Maffay and also accompanied him on his love tour in 1992 ; in the same year he was involved in the sessions for the album Zoom by Alvin Lee . He also appeared on recordings of Aretha Franklin and Twisted Sister , most recently on Lady Gaga's album Born This Way .

In late 2009, Clemons published his biography Big Man - Real Life & Tall Tales with a foreword by Bruce Springsteen. During the Working on a Dream Tour 2009, Clemons had health problems with his knee, used a walking stick and played most of the concerts on a chair. He was operated on in January 2010.