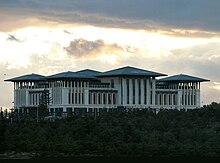 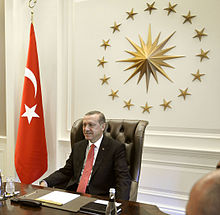 Reception for Mahmud Abbas , President of the  State of Palestine , with costumed representatives of historical Turkic states

The Cumhurbaşkanlığı Külliyesi , in German Presidential Complex (also Cumhurbaşkanlığı Sarayı , in German: Presidential Palace) is the official residence of the President of Turkey in the capital Ankara . The palace, which was built from 2011 to 2014 against a court-ordered construction freeze and against a judgment of the Supreme Administrative Court, is located on the Beştepe area of the Ataturk forest farm .

Originally, the building was intended to serve as the Prime Minister of Turkey . It was not until a few days after he took office as President Recep Tayyip Erdoğan informed that the complex would serve as his official residence. According to reports, with a land area of ​​around 210,000 square meters and a building area of ​​40,000 square meters, around one thousand rooms and a construction cost of 491 million euros, it is one of the largest state palaces in the world and replaces the previous presidential residence , the Çankaya Palace , which was already occupied by Mustafa Kemal Ataturk , from. The style is based on the Seljuk architecture, which has been supplemented with modern elements. The leading architect was Şefik Birkiye .

Erdoğan commented on the architecture:

“Turkey is no longer the old Turkey. Architecturally speaking, it was necessary to convey Ankara's message as the 'Seljuk capital'. We paid attention to Ottoman motifs in the interior design. "

While in the European press there was often talk of a revival of Ottoman sultan's palaces due to its dimensions , the well-known historian and former museum director of the Topkapı Palace , İlber Ortaylı, replied to Erdoğan's words that firstly, Ankara was never the Seljuk capital (but Konya ), secondly, there is no Seljuk palaces, the Seljuks would have invested more in bridges and Koran schools , and the Ottomans would have been more modest when it comes to palace construction. Regarding the Ottoman motifs, he doubted the skills of “suburban architects”.

In January 2015 Erdogan announced that he would in future refer to the building as “ Külliye ” in order to tie in with Ottoman tradition. Since then, the presidential seat has been referred to as Cumhurbaşkanlığı Külliyesi on the official website of the president, invitations, etc.

The building area was the forest farm in the west of the city , donated by the republic's founder Mustafa Kemal Ataturk and serving as a green lung , which was placed under special state protection as a local recreation area . For this reason, the development was highly controversial. The construction continued to be controversial, as the government under Recep Tayyip Erdoğan was accused of disregarding regulations and laws with the construction. Despite several court orders including an immediate construction stop, Erdoğan ordered the building to continue and commented in May 2014, “We are not doing anything illegal. If she [note: the opposition] dares, she should come here and tear it down. ”In May 2015, the highest administrative court in Turkey declared the building illegal in a unanimous vote and rejected the basic building permit.

On November 28, 2014, Pope Francis was the first head of state to visit the Turkish president in his new palace, followed by Russian President Vladimir Putin on December 1, 2014 as the second head of state .

The opposition leader Kemal Kılıçdaroğlu initially refused to enter the official residence in protest. Only after the attempted coup in 2016 did he visit the president.