The title of this article is ambiguous. For the American theologian with a similar name, see Dagmar Braun Celeste (* 1941). 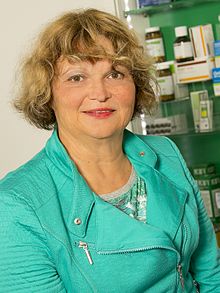 Braun completed her schooling in Philippsthal and Heringen (North Hesse) in 1975 with the Abitur. From 1975 to 1982 she studied human medicine in Göttingen , Mainz and Aachen . She then completed a traineeship for teaching at vocational schools with a major in health and a minor in chemistry.

During and after her studies, Dagmar Braun completed her doctoral thesis at the Max Planck Institute for Biophysical Chemistry in Göttingen. The subject of her dissertation was in the field of pharmacological neurophysiology.

In the first three years after her license to practice medicine in 1982, she worked as a practice assistant and practice substitute to deepen her knowledge in the field of general medicine. From 1985 to 1998 she devoted herself to training medical assistants in medical expertise at the vocational school in Usingen (southern Hesse), and from 1995 to 1997 she was a lecturer at the Academy for Medical Training in Bad Nauheim at the Carl-Oelemann -School and has been teaching since 2010 as a lecturer and since 2014 as professor of health economics at the Fresenius University of Applied Sciences in Idstein .

Dagmar Braun began her career in industry between 1988 and 2001 as a phased plan officer at the pharmaceutical company Palmicol GmbH, where she was responsible for the development and management of the approval department and the medical-scientific department from 1995 to 2001.

From 2001 to the end of 2008 she took on a key position at Riemser Arzneimittel AG , which she built up together with her husband Norbert Braun , as the Board Member for Research & Development ( CSO ) and later also Board Member for Materials Management ( COO ) .