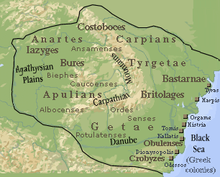 Decebalus was from around 85-106 AD the last king of Dacia , a country that included parts of what is now Romania . After the invasion of his empire by Roman troops in AD 106, he killed himself to avoid captivity.

Decebalus reorganized the Dacian state after a century and a half of decline that followed the death of King Burebista († 44 BC). In particular, he managed to unite the various Dacian tribes and set up a new army. Contrary to some entries in the secondary literature, Decebalus is not to be equated with Diurpaneus. Furthermore, it cannot be assumed that Decebalus was only a victorious surname, as there are other people with this name in Roman military diplomas.

In the winter of 85/86 or in the summer of 85 strong Dacian formations under the leadership of King Diurpaneus penetrated from the north across the Danube into the Roman province of Moesia and met the Romans completely unexpectedly. After the Roman defeat, in which the provincial governor Gaius Oppius Sabinus was killed, there was looting and pillage. Since the Dacians had already undertaken numerous raids on Roman territory in the past, the time had come for Emperor Domitian (81–96) to personally initiate rigorous countermeasures in order to first throw the enemy out of the country and then send out a punitive expedition .

With fresh strength from different provinces (including Pannonia and Upper Germany ) he went to Moesia. After the Dacians had been driven back across the Danube by the end of the year, Domitian returned to Rome and celebrated his triumph in early 86 . In the summer, the Roman troops, under the leadership of the Praetorian prefect Cornelius Fuscus, set out on a punitive expedition to Dacian territory. The chosen route probably began at Oescus with the construction of a ship bridge over the Danube and then followed the course of the Aluta (Olt) northwards towards the southern Carpathians. However , his army was defeated at the Rotenturm Pass . Fuscus died in battle, while all Roman equipment and numerous prisoners fell into the hands of the Diurpaneus. Because this defeat threatened to significantly reduce the emperor's prestige, Domitian returned to the Danube border. Diurpaneus could be eliminated in this 2nd Dacian campaign by Domitian in the same year. It should be noted here that some reconstructions of these events do not assume an elimination of the diurpaneus, but rather consider its equation with the Duras mentioned below to be probable (similar to the description by Karl Christ). Karl Strobel , however, firmly rejects this interpretation.

Another event within Dacia was soon to give the conflict a decisive turn: Duras, the prince of a south-west Dacian kingdom, had resigned around the year 85 in favor of his relative Decebalus. With Decebalus, a politically and militarily highly qualified person came to the throne who had great negotiating skills and charismatic traits. As the price for his neutrality, he demanded Roman recognition as a client prince and the payment of subsidies . Confident that his military would defeat the Dacians on the offensive of 86, Domitian turned down this unfavorable offer to negotiate. After the eventful battles that year, the Dacian tribes of Decebalus, who were at war with Rome, took the lead. Domitian reacted with massive restructuring in the Danube provinces and new war plans. A year later, the legate Tettius Julianus tried to advance from the Banat to Sarmizegetusa , the Dacian power center. Despite several successes, the campaign was broken off. Reasons for this may have been high Roman losses or simply the too far advanced season. During the battles for Dacia, the Germanic tribes of the Quadi and Marcomanni had not fulfilled their obligations with Rome. Under the Dacian alliance of the tribes there were also Roxolans and the Germanic Bastarnen allied with them , who had been in friendly coalition with Dacians and Geten since Burebista. The Germans of all tribes supported the Dacians in the hope of getting rid of the Romans for good.

The danger that emanated from these unfaithful tribes prompted Domitian to undertake a punitive expedition to the Barbaricum before the planned Dacian war , but it failed. The Marcomanni routed the Roman troops, which induced other tribes to enter the war. After so many defeats, the Roman emperor had no choice but to offer Decebalus a compromise peace in 89 to buy time. This peace meant that Decebalus was recognized as the vassal king for all of Dacia and also included the payment of subsidies to the Dacian king and the transfer of civil and military technology. It was only with this event that Decebalus had the opportunity to create an all-Dacian kingdom; the first since the empire of the burebista .

The Dacian Wars of Trajan

Emperor Trajan (98–117), who also required a convincing military success in order to legitimize his rule, began preparing for the next Dacian war as early as the year he took office. The campaign began in 101. The advance was rather slow, as the Romans gradually expanded and secured the conquered area. At Tapae there was the only field battle of this campaign. When the Dacian defeat became foreseeable, Decebalus withdrew his troops in an orderly manner. At the same time, however, the Dacian offensive began in the area of ​​the lower Danube, which was carried out together with the allied Roxolans . However, the Roman forces were strong enough to win this two-front war. Decebalus could not force Trajan to evacuate Dacia and the invaders on Roman territory were repulsed. The Tropaeum Traiani near Adamclisi was built as a victory monument for the latter . After the fighting in 102 Decebalus offered his submission, but was able to negotiate relatively favorable terms. The 1st Dacian War of Trajan was thus over.

After further extensive armament, Trajan began his 2nd Dacian War in 105 with around 15 legions and numerous auxiliary associations . Decebalus, to whom the Roman preparations for war had not remained hidden, had for his part rebuilt the Dacian fortresses and expelled the Jazygens from the formerly Dacian areas on the upper and middle Tisza, which had been lost to them in Trajan's first Dacian War. In 105 he responded with a preemptive strike against the Roman positions on his territory. Although he was able to achieve some success here, he did not succeed in storming the large legionary camp on the site of the later Colonia Ulpia Traiana Sarmizegetusa . Decebalus' attempt to put Trajan under pressure by taking Pompey Longinus hostage failed when Longinus committed suicide. In 106 Decebalus was left with the only option to defend his mountain fortresses against the Roman overwhelming power. After he was first expelled from Sarmizegetusa, he tried to organize the last resistance in a remote fortress (not clearly localized). But this was only a short interlude. Decebalus had to flee again, this time with only a few remaining confidants. When the pursuing Roman cavalry nearly caught up with him, he cut his throat to avoid capture. The death of the Dacer king is depicted on the Trajan column and the tombstone of a Roman cavalry soldier from the Ala II Pannoniorum . The cavalry soldier's name was Tiberius Claudius Maximus , and his tombstone was discovered in northern Greece in 1965. For bringing the Decebalus' head to Trajan, Maximus was promoted to Decurio . Dacia became a Roman province and remained under direct Roman control until 271, when Emperor Aurelian (270-275) gave up the area again.

Since 2004, the 40 m high head of Decebalus, carved into the rock, has been located on the Danube near Dubova near Orșova . The work, which is not based on secure historical foundations , was initiated and financed by Iosif Constantin Drăgan (1917-2008), a Romanian businessman and historian.