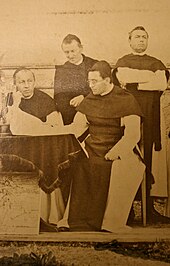 Father Dominikus Willi as a young monk in Wettingen-Mehrerau Abbey, sitting on the right (right behind him with crossed arms P. Gregor Müller , before 1890) 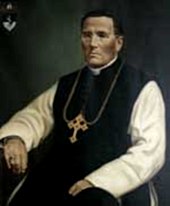 Martin Willi was born the fifth child of a royal Neapolitan officer. After graduation, he entered the novitiate in 1861 in the Lake Constance in Bregenz nearby Cistercian abbey Mehrerau , where he received the religious name "Dominic". After professing on November 13, 1865, he completed his philosophical-theological studies in Einsiedeln and Mehrerau. On May 12, 1867, he received the sacrament of ordination , and in 1878 he was given the office of prior . In Mehrerau, with a short interruption, from 1875 to 1888 he was director of the Collegium Bernardi , the school attached to the monastery.

In August 1888, Father Dominikus moved with eight fellow brothers from the Abbey of Mehrerau on Lake Constance to the Diocese of Limburg and, as prior, repopulated the Cistercian Abbey of Marienstatt in the Westerwald near Hachenburg. In 1889 he became the first abbot of Marienstatt after secularization , where he had the old Gothic abbey church renovated and redesigned according to the Cistercian ideals.

On June 15, 1898, Dominikus Willi was elected Bishop of Limburg by the Limburg Cathedral Chapter and seven days later by Pope Leo XIII. appointed. He was ordained bishop on September 8, 1898, by Bishop Paul Leopold Haffner . Willi succeeded Bishop Karl Klein , who died on February 6, 1898.

During his tenure, the diocese expanded to include five parishes and 21 other pastoral offices . In 1903 he founded the Limburg Diocesan Museum.