Domizio Calderini (* 1446 in Torri del Benaco near Verona ; † between January and May 1478 in Rome ) was an Italian humanist . The pugnacious publicist of Renaissance humanism was one of the most important commentators on ancient Latin authors.

In addition to his Latinized name Calderinus , various variants were used, including de Calderiis , combined with Domitius or Dominicus as a first name. 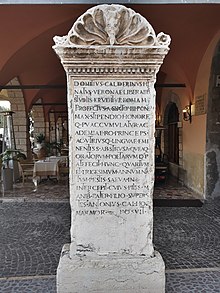 Calderini received grammar lessons from Antonio Brognoligo in Verona, probably in 1464 he went to Venice to learn from Benedetto Brugnoli . Two years later he moved to Rome and became secretary to the cardinal and important Greek scholar Bessarion . He also taught at the Studio Romano (Studium urbis) . In 1470 he became professor of rhetoric and Greek there, and in his lectures he probably gave priority to the authors with whom he was currently working. He was one of the first researchers to combine research and teaching directly, his comments on the works are reworked lectures. Among his students were Aldus Manutius and Marcantonio Sabellico . In 1471 he also became apostolic secretary. In 1472 he accompanied Bessarion on his journey to France, where he died. He then returned to Rome. In 1473 he traveled to Florence , where he met the young Angelo Poliziano , with whom he later frequently quarreled. Poliziano developed his method through discussion with Calderini. In 1476 he traveled to Avignon and died of the plague in Rome two years later .

Calderini achieved the greatest importance as a commentator on the authors of the so-called " Silver Latinity ". Despite criticized deficiencies in detail, it was usually the first critical examination of the works of the relevant authors that had a great impact on later researchers. Calderini often struggled with the poor early prints of these works, which is why he repeatedly emphasized the value of the old manuscripts. He himself tried to balance questionable passages by drawing on his knowledge of the Greek language and authors. His Appendix ex tertio libro observationum from 1475 is considered the prototype of commentaries on certain passages in ancient works; Poliziano took her to the climax with his Miscellanea . Despite some mistakes, the results of his work were noteworthy and exemplary, considering the resources available during his lifetime. 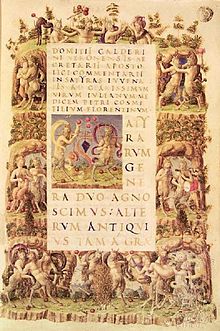 In 1473 Calderini published his commentary on the epigrams of Martial in handwriting , a year later the commentary appeared in print. It was in direct competition with the commentary by Niccolò Perotti , published around the same time . Both this and Giorgio Merula and Poliziano sharply criticized Calderini's comment. Poliziano's criticism probably ended the good relationship between the two. Calderini then began a veritable feud with Perotti. He criticized several of the readings of Pliny the Elder's Naturalis historia in Perotti's commentaries. In addition, he gave him the name Broteas in his writings , the name of the ugly son of the god Vulcanus , who sought death in fire because of his own ugliness. In 1474 Calderini published his commentary on Ovid's Ibis and completed the commentary on Juvenal , which appeared in print the following year. In the Juvenal commentary he added another polemical attack on Perotti, Defensio adversus Brotheum . The comment was then strongly attacked by Perotti and also by Angelo Sabino .

In 1475 Calderini published several shorter commentaries in an anthology (on Silvae des Statius , Ovid's Sappho letter and some passages in Properz ). He also included an appendix from his third book of Observations in the volume. The first volume of the Observationes was to contain several passages from Pliny's natural history, a second volume questionable readings in poetry, and the third volume in prose. However, he only managed to publish 15 chapters of it, covering both poets and prose writers. He was unable to complete the project until his death. He wrote other comments, among other things, on poems from the Appendix Vergiliana , on the Atticus letters of Cicero , De officiis of Suetonius , Silius Italicus , Ovid's fasting . Not all of the commentaries were complete by Calderini's untimely death, and some have been lost. In addition, today it is no longer always entirely clear which of his many announcements of comments he actually implemented.

He edited part of the Declamationes maiores of the Pseudo- Quintilian and had announced that he wanted to publish the entire text. In addition to the Latin works, he also devoted himself to the Greek authors. He revised the translation of the Cosmographia of Claudius Ptolemy by Jacopo d'Angelo (about 1360-1410) and began a translation of the work of Pausanias into Latin, before the completion of which he died.

Despite attacks from some other humanists, many of Calderini's commentaries remained influential and in use well after his death. For example, the commentary on Statius' Silvae was printed even more frequently, and the one on the Appendix Vergiliana was printed several times in the Opera Virgiliana together with other commentaries .